Winis are the beaded strings traditional Guna women wear around their legs and arms. It's not a bracelet, the wini is made directly onto one's limb so it is custom fit and permanent until the string falls apart. I immediately wanted one when I saw the women wearing them and was delighted when it turned out we could get them. But even if I had not cared to have one, I would have sought one out anyway just for the opportunity to hang out inside a villager's hut. Unlike our host Nacho's house, the woman I hired to make mine lived in a traditional dirt-floor thatched-roof bamboo hut (the most common type of home in Armila). I don't have a pic of her hut, but this is similar. 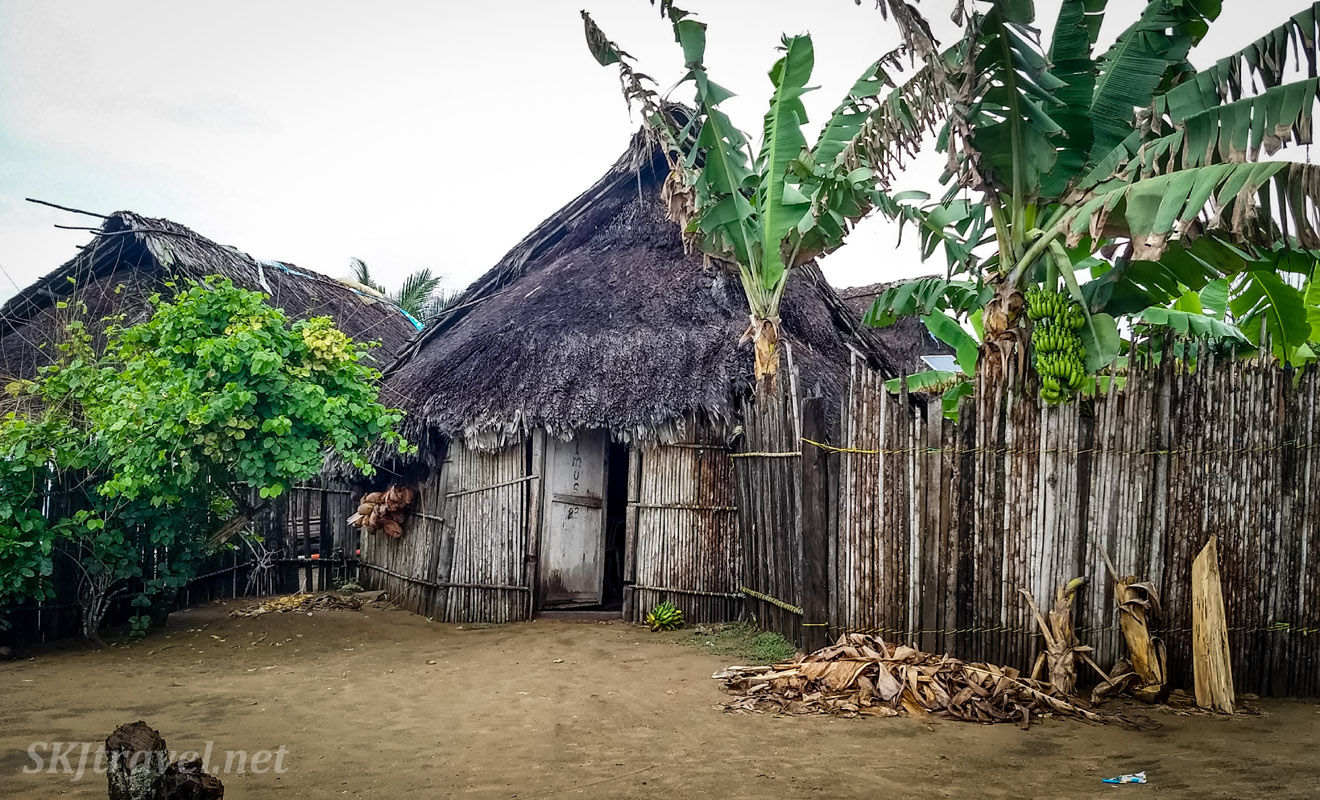 I loved this opportunity and I made detailed notes of my time in there after I got back to my hut each time, particularly the second time. I will share them with you in case you are interested to know what a typical scene inside one of these is like. It is a simple portrait of just what I saw and did. I want to make note that although I often refer to the ubiquity of the dirt and what in context of American homes would be considered "filth," I do not mean these words pejoratively. This is the way the villagers live and have lived and they're all about as healthy as people in my town. I just don't know how else to describe things succinctly and it's very different than my personal existence at my home ... and these are the experiences I most love. The more different, the more I love it. (Doesn't mean I want to live it! haha. Just like to know it.)

Notes from my first visit.

Got my wini today, was worth it just to get the opportunity to sit inside the lady’s house and see what goes on. The hut was insanely hot, no windows, the spaces between the bamboo sticks covered with fabrics (I suppose for privacy, but arrests air flow) and a dirt floor. I was sweating buckets. The woman, I regret I didn't learn her name, made Judith's first and I sat in a broken, rickety plastic chair beside them wiping away sweat. Two young children entertained me, a baby boy and a particularly snotty-nosed but utterly adorable little girl, probably a little more than two years old, cute as a button. They were filthy dirty and wanted me to hold and play with their filthy toys. Ack! I had to scold myself not to be prissy about it, and I took them, comforting myself with visions of soap in the back of my mind. One of the toys was kind of like a radio and half of the buttons produced sounds (was happy for the other half that were broken). The girl was very entertained by me reacting to the sounds over and over.

She and the boy both took baths with a hose and tub outside during the course of our stay, and they were clean for all of one minute. Then next minute, dirt smeared all over their faces (mixed with snot), the baby dragging his little butt across the ground, the little girl eating a dirt-encrusted cheetoh that had fallen on the ground. Thank god she didn't offer me one! After the infant was re-bathed by an older sister, she put him on mom’s lap along with a towel; mom had just finished Judith’s wini. I figured she’d dry her son off and maybe hold him for a minute before starting on mine. But she took her boob out of her shirt and began breastfeeding. Didn’t expect that!

We took a break then and came back a little later. During the making of my wini (on my wrist) I mostly held conversation with Judith and didn't pay as much attention to my surroundings, looking down at the process of the wini being strung onto my wrist. I don't speak enough Spanish to be able to say anything meaningful to the wini-maker except how much I liked it. The hut, BTW, is not one open space, but partitioned into two further back rooms that I couldn't see into. So the front room is like the sitting room, and presumably bedrooms in the back. They have a different hut for cooking in. 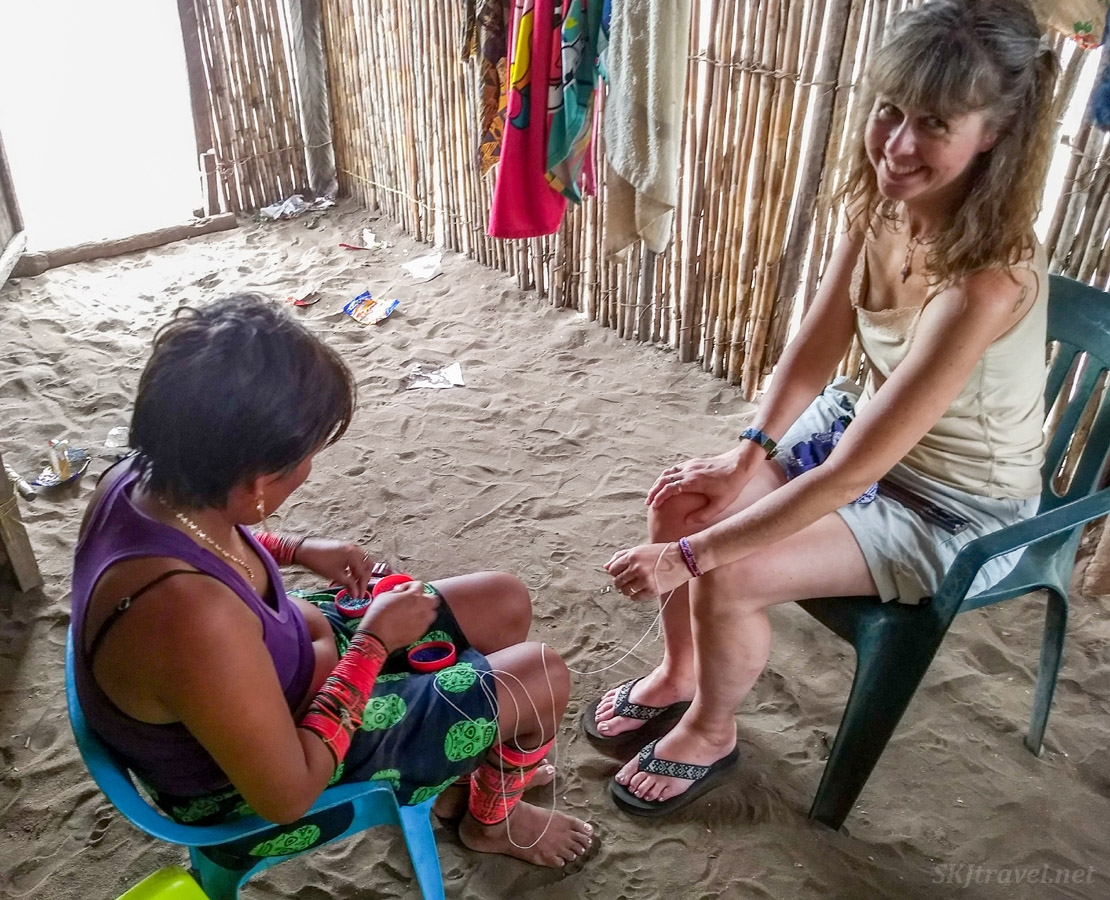 Notes from my second visit. (I came alone to get one on my ankle)

I wish I could have drawn the scene. She’s [the wini-maker] sitting, covered in her elaborate winis -- orange, pink and green -- her tiny, almost child-sized hands, with chipped red nail polish, gold heart earrings hanging down and a rhinestone heart necklace. She has a mango lodged in her shirt between her breasts, holding it for one of the kids to come back and get it. In the stick hut, today the floor more mud than dirt, a ring of dilapidated plastic chairs in the room, she in a child-sized one lower than me, plastic jar lids on her lap holding the different colored beads. She's talking with her kids, and the kids among themselves in a language I can’t remotely understand.

I'm looking at the doorway. On the lintel, the infant boy is naked on the dirt floor looking outside. A dog is lying near my chair in a cloud of fleas, biting its side with vigor. Two insanely adorable girls are playing outside, holding each others’ hands and swinging each other around (like how we used to do roller skating). The darling girl from the other day wears green bottoms  with two rows of lace in the back and a bow right in the middle of her little butt. Boys run around naked for years, but I never saw a naked girl. She and her friend both have stuffed animals. But they are soon discarded onto the dirt and a puppy comes along out of nowhere and starts playing with one, holding the bear’s foot and tossing it about like dogs do with their toys.

Outside the door is the school courtyard and community volleyball court, with a small wooden grandstand and wooden volleyball net poles. People continually walk past, one man slapping big palm leaves on the ground. I’m holding a notepad on my lap that the sweet daughter has scribbled on over and over to my expressed praise and delight, no matter to her that I’m speaking in English, she gets the tone and gist of my voice.

An adolescent son comes in and pulls on the infant's willy until the infant cries and starts crawling through the dirt to his mom. The older sister from the other day changes into a training bra in the corner of the room, not minding me. Her hair is still long, which I was told means a girl hasn't yet hit puberty, but I saw some teenage girls with long hair, so I'm not sure. Adult women all seem to have short hair.

All over the walls of the stick hut, clothes and daypacks are hanging. I can’t see behind the partition wall, but the space behind it isn’t particularly large, especially considering how large the family seems to be. The adorable girl keeps saying “why” to me. But she's not speaking English, I was told it's the Kuna word for anyone not Kuna. But I kept answering her as if she was asking "why" in English. Doesn't matter what I say, she just likes to hear my voice. She has pretty little gold earrings and big, wide-set eyes, short hair, just could not be more precious.

Mom, the wini-maker, is so gentle and loving to all the children. I don't need to know Kuna to understand how she is talking to and treating her children. The infant clearly gets separation anxiety anytime he’s in the room but not with her. The older sister tries to comfort him, but he is seldom satisfied with her. I feel badly that I'm taking his mom away from him!

Before starting on my ankle, she first fixed my wrist wini which was too loose, the strands were separating and dangling down my wrist. It was interesting to watch her unwinding the string and transferring beads back and forth between the bead lids and the wini via a needle to tighten the design, taking out a lot of excess beads while keeping the pattern together. She was clearly a little frustrated or annoyed, not at me, but I think in exasperation with herself that she made it so loose, just judging by the little huffs and sighs she quietly emitted as she removed so many beads. I should have paid her more for the fixing, though she clearly did not expect to be paid, but I only carried one extra dollar, I did not realize how involved it would be ... it took 30 minutes. I should have paid her $2; she charged 5 dollars for the original wini, 1.5 hours of work. She accepted the extra dollar on top of the 5 for the ankle wini with a bit of surprise and gratitude, but I privately felt cheap. Even though she was fixing a mistake, it was still 30 minutes of her time and she clearly had a lot of other demands on her from her family.

So there's a snapshot of my time in the wini-maker's hut. I treasure this time. But I remain surprised at how cheap her labor was. It was the same for the naiwar basket I bought from the basket-maker. For context, a coke at the village store that has a cooler costs $1. So for 30 minutes of her time and unique skill restringing my wrist wini, I basically bought the woman a coke. 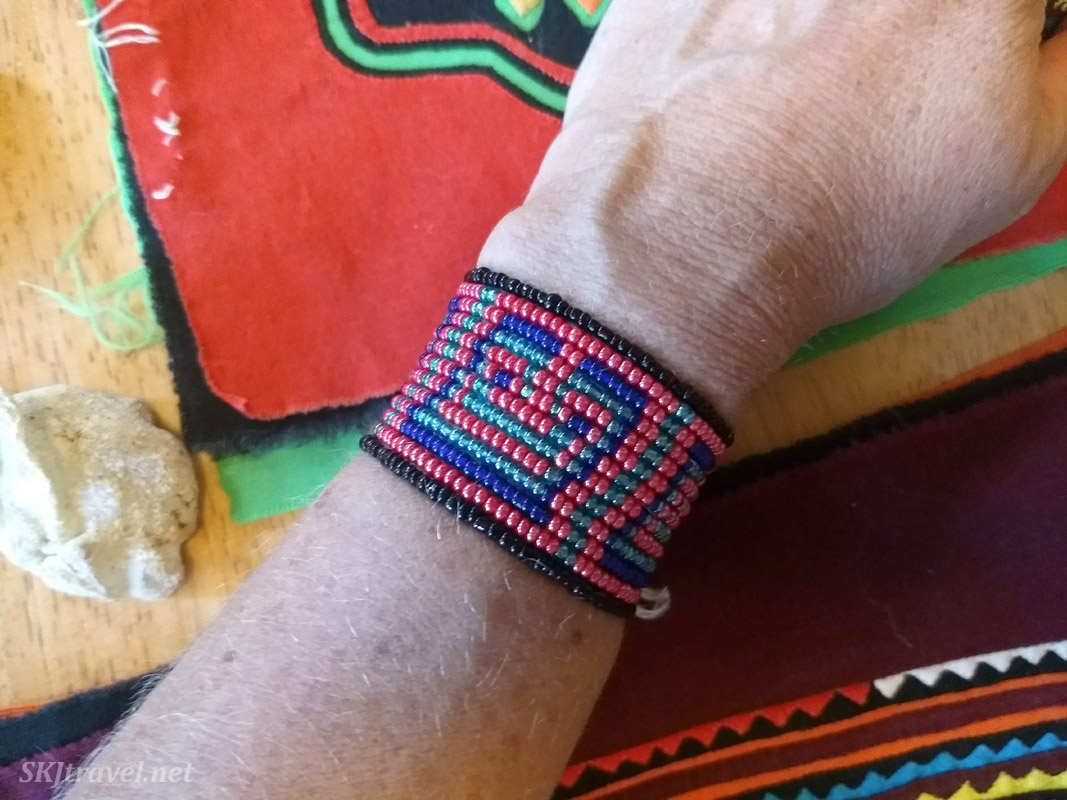 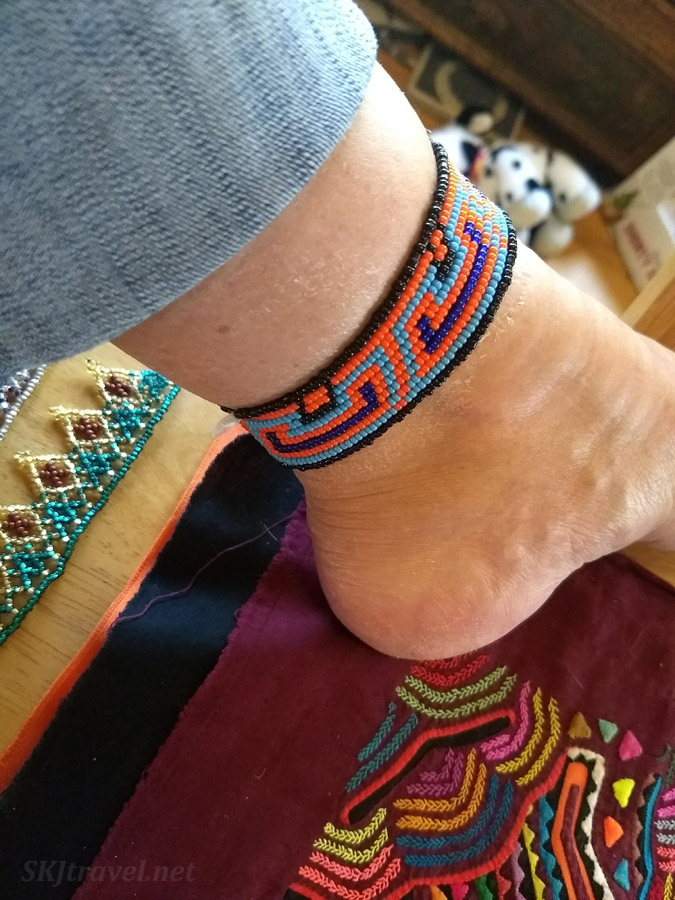 My time in Armila was made possible through the artist residency at La Wayaka Current.