How We Found Our Riad in the Marrakech Medina

So we usually have our own GPS system that we take with us traveling … not a little Garmin device but software on our laptop, but we couldn’t find the puck that gets the GPS signal, so we had to rent GPS at the car rental place. The rental guy tried to help us get started by putting in the address of our riad – traditional Moroccan guesthouse – into the GPS. I had consciously chosen a small guesthouse inside the media rather than a hotel. After very many minutes, he admitted he could not get the address to show up on the system. (I had a print-out of the address with the reservation confirmation.) So instead he put in a building that he said was near the area of the address, so if we just got there, then maybe we could figure out from there where to go based on a paper map I printed out with the confirmation. So off we go, a little unsettled but not too terribly worried.

The street out of the car rental lot was straight, broad and simple. At first. Then we came to the medina, that is to say the outer wall of the medina. It was a chaotic jumble of cars, taxis, mopeds, donkey carts, people, and an unlikely-looking road at a stoplight heading into the medina. We missed the turn (for lack of believing the GPS was telling us the correct road), had to continue down the street and turn around, follow the GPS voice into the medina, through an archway in the wall, into teeny tiny cobblestone streets, wide enough for one car, not sure if cars are even allowed or if we’re going the right direction. At one point we encountered a sign that seemed to say we shouldn’t enter, but we had no choice, there was no room to turn around. A guy on a moped and his passenger passed the other way and gave us a fist like we were doing something wrong. But we came up on another car going in the same direction as us, so we were confused.

Poor Erik was super stressed, it really didn’t seem like a place cars should be. But then we reached a parking lot. (So clearly cars are OK.) So maybe this is where the GPS intended for us to go. We parked, consulted it and the paper map, looked around us really confused and uncertain what to do, nothing looked like a real street. So a couple guys loitering in the parking lot came up to our window. We asked them if they could point out to us on the paper map where we were. One spoke good English, and he consulted the map and GPS for awhile, along with the guesthouse address we gave him, and finally he said, OK he could help us.

So he did help us get back out the way we came in and coached Erik in a way that turned out to be extremely helpful to him to understand and feel confident about navigating in the medina streets (not about *where* to go, simply *how* to go, traffic etiquette or lack therefore, etc., just kind of how things work).

Then he said we had to park at this one place and walk into the medina to our guesthouse. The only spot open was a teeny tiny spot along the sidewalk, so parallel parking. The parking attendant was not very friendly and wasn’t satisfied with Erik’s first attempt. Let me stress that when parked, there were about 2 inches in front of and behind our car. I thought it was an admirable job after he did it the second time. Our “guide” was very comforting to Erik, telling him not to get stressed, don’t worry, stay calm, directing him into the slot. So finally parked, we extract our luggage, pay the parking guy 60 dirhams for 24 hours of parking. We follow our guide into the medina, rolling our big suitcases behind us down the cobblestone street. Immediate immersion into the medina. Sights and smells, this isn’t a souvenir section, but food and necessities. Mounds of strawberries and fruits, raw meat hanging in front of butcher shops, occasionally the smell of cilantro or mint is overpowering as we walk by piles of it.  Sorry … I just realized I’m shifting into present-tense writing. I always do that when I’m relating something that seems in my mind fresh or like an ordeal or adventure … “So there I am in the middle of nowhere …” etc. haha. K, I’ll try to be consistent. Back to past tense.

Our guide is chattering away the whole time about Marrakech, and eventually we turn a corner and walk up to a dead end. He looks around, confused. A man comes down the street (or out of a house, I don’t remember) and they have a conversation in Arabic and he politely nods to us. Oops, I’m still in present tense. So the end of that conversation led our guide to apologize that we were not in the right place. “There are two streets of this name!” So we turned around and followed him all the way back to the parking “lot.” The whole time he was apologizing and explaining why he took us to the wrong place, but insisting he really did know where we should go and saying we made a good decision to stay at a riad in the medina, it’s an authentic experience, not like a hotel, etc.

So we of course asked the parking man for our 60 dirhams back, as we were only there about 20 minutes or so. He didn’t want to give it back. Erik and I loaded our luggage while our guide argued with the parking guy. Argued vehemently to the point where Erik tried to calm them down, “Guys! Guys!” We thought it was about to come to fisticuffs. So we eventually got 55 back and the guide was fuming over how the parker was taking advantage of us just because we were tourists.

So off to another location, basically just driving around the outside of the medina wall. This time we arrived at a “real” parking lot with pull-in spots and a nice attendant, who turned our mirrors in for us and made sure all our doors were locked. Still 60 dirhams per day for a much nicer spot.

As we walked through the ancient gateway rolling our luggage behind us again, our guide kept apologizing to me, “Madame, I’m so sorry.” I didn’t think I was being dour or anything, but he seemed to think I was upset, he probably just guessed my fear that I'd misplaced my trust in him. So we walked in, took a right turn, then a left turn, I was beginning to worry about finding our way back out to the car when we arrived at a door with a plaque outside with the name of our riad! Hallelujah!

I’ve seldom been so happy to arrive somewhere. I knew the man would ask for money, and he asked for a lot, but we didn’t balk. He was actually extremely helpful to us, and he never pretended he was helping us just for the heck of it as if he had nothing better to do (as future people would), he said up front, “This is what I do.” Erik and I are both convinced we would never have found the place without his help. So it was well worth 300 dirham, about USD$30, and frankly I consider it pretty serendipitous that he was hanging out in the parking lot where we first pulled in because that wasn’t a tourist parking area.

So huzzah! The lady who answered the door for us didn’t speak English but she led us to a table to sit and soon came back with a phone, she had dialed the proprietor to let her know we’d arrived, who then spoke to us on the phone.  By this time, it was late in the day. They had beer available for purchase, they had food available for purchase. So we had some beer and ate in, it was a great convenience and the food was delicious. It took about 45 minutes to make after we submitted our selection, but super worth the wait.

The door to our riad is the red one underneath the little awning. You ring the doorbell to be let inside. 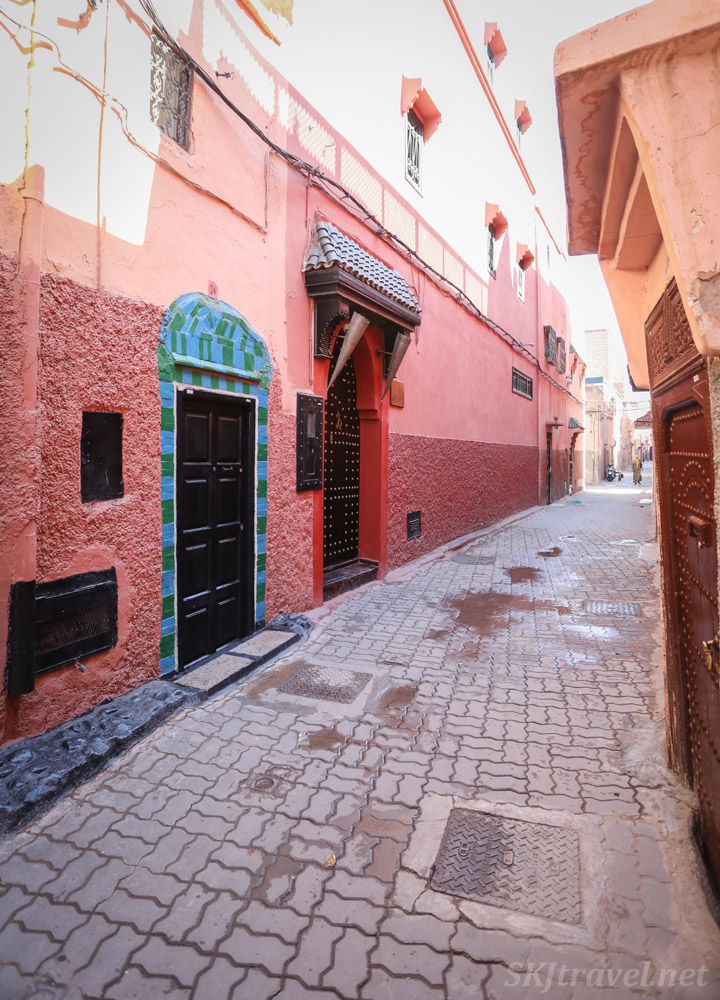 Below is the central courtyard where meals were served and lounging chairs where we enjoyed happy hour beers (for a pretty penny, but the convenience was nice). The guest rooms on the second level were in a ring around the courtyard, and on the third level around the perimeter of a rooftop terrace, which was also a pleasant place for a beer. In the second pic, you can see Erik in the back corner, where we monitored the virus situation every evening online with a beer. 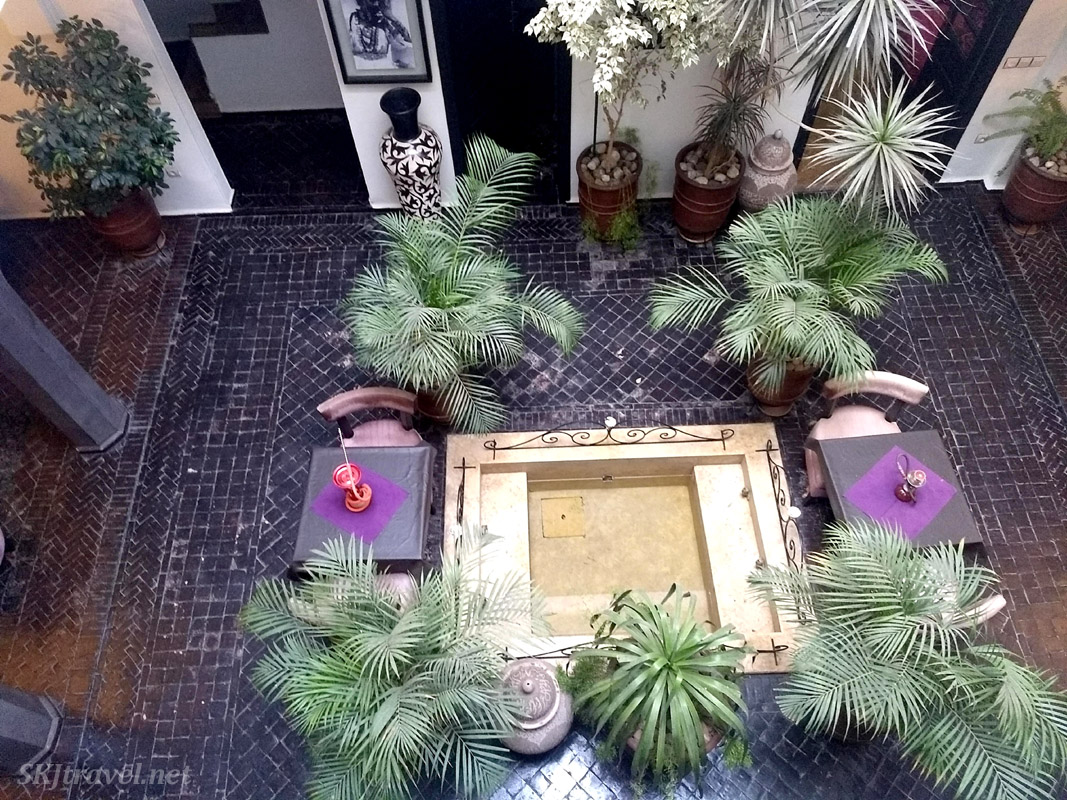 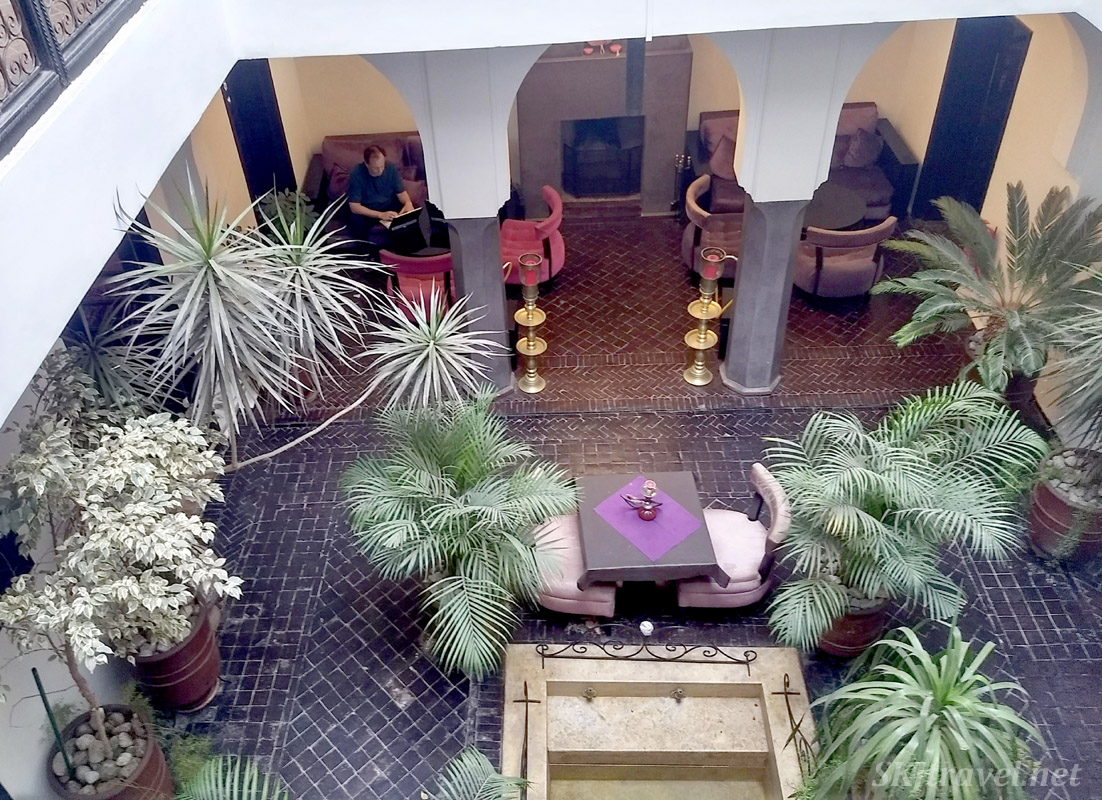 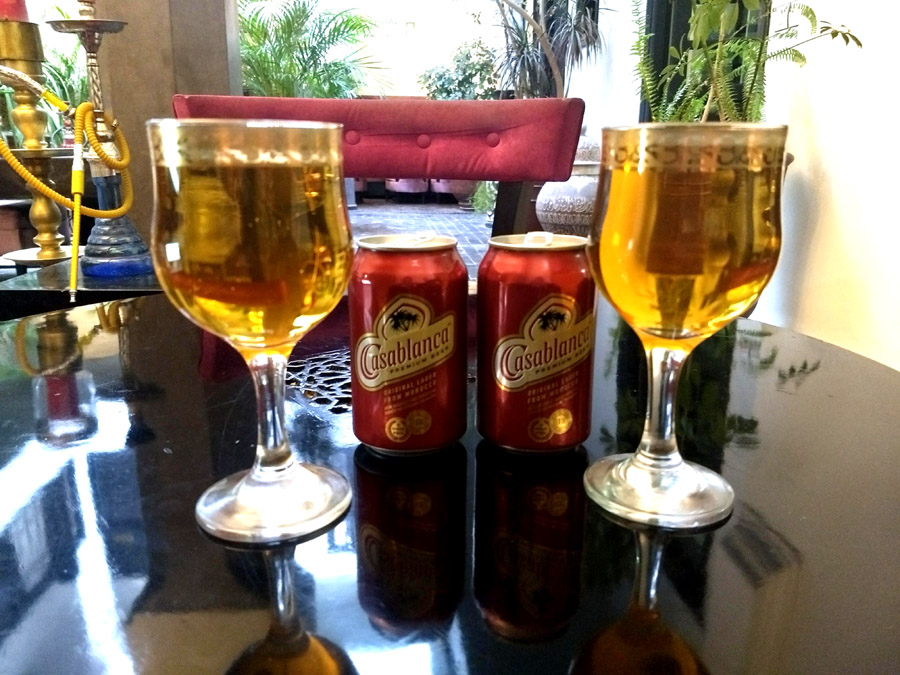 If I were in Marrakech again, I might well book this place again. If you're interested in accommodations, here are the pros and cons: The breakfasts were very overpriced for basically an assortment of breads, but the convenience of breakfast with my bed is something I prioritize when traveling. The beers are expensive, but they're not that easy to find in Marrakech, so again a convenience to have right there. Bottled water overpriced, but there are kiosks everywhere in the streets to buy it cheaper. You could also order dinner,  which they make to order (so it takes quite awhile), and the dinner I thought was priced OK and we both thought the food was full-on delicious. Good internet. Room and bathroom clean. The staff was friendly, not all of them spoke English, but there was always someone at night who did. So many things are about location location location, and I thought this was well-situated -- close to a parking lot (with a nice attendant) if you've got a car, inside the medina but on a quiet street. A traditional family guesthouse, so much more homey and authentic than a hotel. There were four other guests staying at the same time as us. Find it online at Ryad Amiran and Spa. And if you're driving ... ask them for directions to the nearest parking lot!