How I miss my chimps!  Have been back home for a few months now, but think of them every single day. I force my friends at the UWEC to send me stories about what the chimps have been up to. There is never a dull moment. I saw the "Chimpanzee" movie after I returned home, and of all the odd things to put a zinger in my heart from that adorable movie, it was when the chimps would get worked up and all start yelling and screaming and barking through the forest. It's the kind of sound, when you hear it in person, you don't forget it. As I heard it every day, several times a day, at the UWEC, it's one of those things that is now sweet and nostalgic to me ... the sound of a group of chimps going "ape shit," to use the charming slang. At times it could be nearly deafening if the whole group was riled up screaming, particularly if they were inside the night enclosure. In the chimp house they would also be rattling the caging to add emphasis. If Helen or Robert were around, they would typically go in and try to get the chimps to calm down. Robert would yell, "Hey guys! What is going on in here? Come on, guys!"  But I actually got a kick out of going in there and just listening to the riot. I would have to stick my fingers in my ears to curb the pain, it could be so intense sometimes. Occasionally if it went on and on while I was alone in the chimp house I would finally emulate Robert, yelling at the top of my lungs to hear my own voice and clapping my hands, "Hey guys! What is going on in here?"

While a still chimp makes for the best, or at least the easiest, photo ... I adore so many of the portraits I captured of them ... the active chimp is certainly the most fun to watch, especially when they are interacting with one another. It's really fascinating to watch them socialize and figure out the various alliances and what motivates each chimp. Here are some shots of the active chimps on their island.

Probably the two most active chimps are the two youngest, Onapa and Nepa. They have become known as "my duo." Onapa has the most personality of any of the chimps and is brimming with curiosity and mischief. Nepa adores him even though he often picks on her. She is his little side kick. I love this photo ... you can just see how Nepa (right) is admiring Onapa and wants to be his buddy ... and maybe he'll share his snack with her, too. 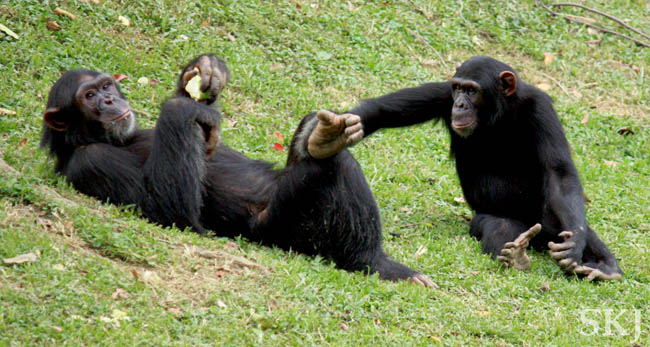 The fire hose strung between two trees like a tightrope was a focal point of activity, and I loved watching the chimps play here. Nepa was particularly adept at running across it in full bipedal form. I tried over and over to get a picture of her doing this, but she was always too quick; I never got anything but a blur. This is the best one I managed to capture. Look how she places her feet, with the hose between her big toe and the other toes. I was constantly amazed at how dexterous and useful the chimps' feet are! 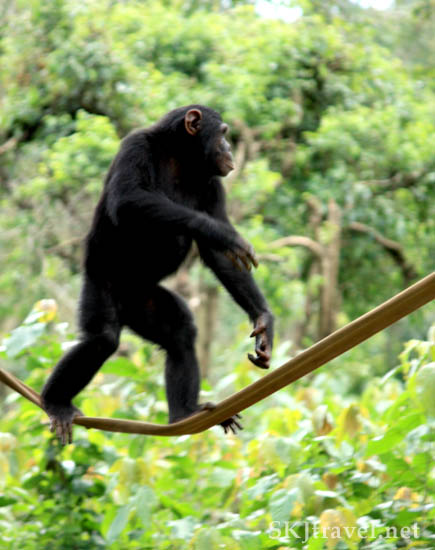 Sometimes chimps would sit amiably together on the fire hose, or at least with indifference to one another. 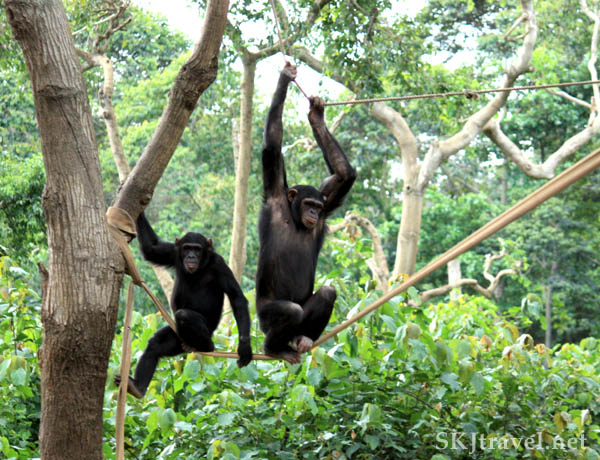 But more often than not, the chimps were playing and picking on one another here. This first photo, I think it looks like the one chimp is tickling the other one, though probably that isn't actually the case. The second photo is classic scenery around the fire hose. Either somebody is sitting peacefully on the tightrope and a trouble maker such as Onapa comes along and stirs up mischief, pulling them off their perch; or occasionally it's the other way around, and somebody is walking innocently by the tightrope when a chimp suddenly swings down and knocks him/her over. 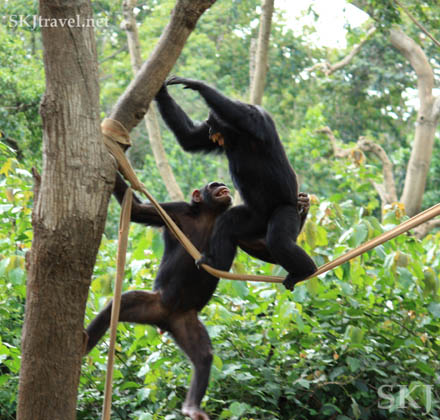 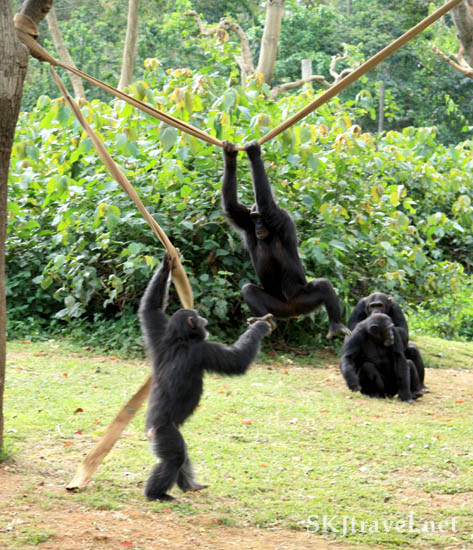 Chimps have an amazing ability to design a plan and carry it out. Motivated largely by the desire to possess things, such as food and toys, they can be splendidly devious little creatures when it comes to figuring out how to get what they want. They can also accomplish their goals in the most entertainingly simple ways, like sneaking up on another chimp and stealing what they want. I didn't even notice at first in this photo of Onapa blissfully playing with his beloved skirt, that there is another chimp springing out from behind the tree trunk to grab it. 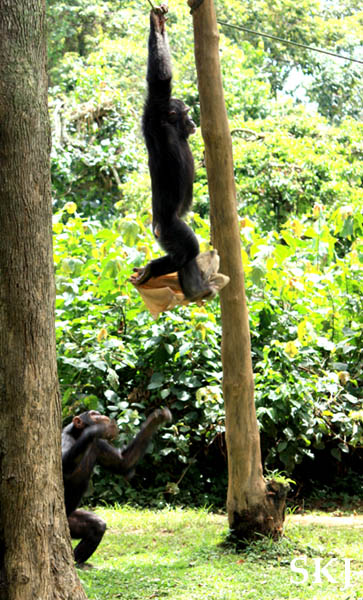 You saw a lot of photos in the Shirts and Skirts post of Onapa and Nepa playing with the clothing Steph and I bought for them. This photo below I love somehow for the sense of foreshadowing it seems to give. Maybe just because I know the silly adventures that happen next (see for example, Onapa climbing down a tree with this shirt completely over his head in Shirts and Skirts). Also, though, the photo seems as if a movie begins here with this strange item being hauled ashore from the moat, this is like the trailer poster ... "The Shirt." or "Dawn of the T-Shirt." or "Shirt on Chimp Island." One of the zookeepers told me he overheard some visitors exclaim to each other as they were watching the chimps playing with some of the clothing and also the shoes I bought for them, "They're teaching the chimpanzees to wear clothes!" 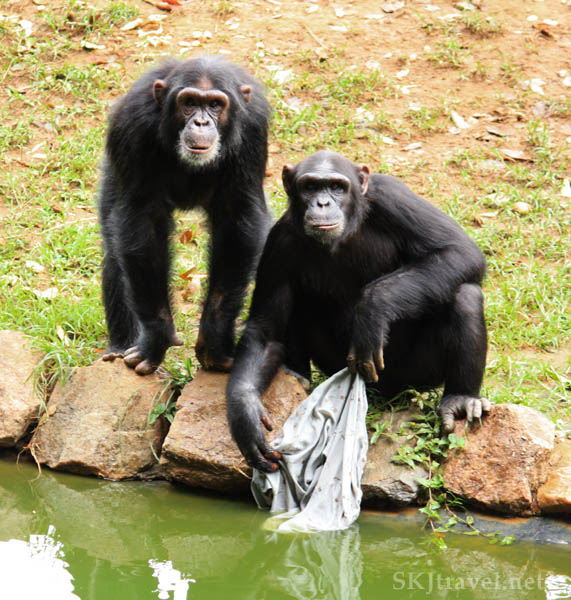 I was always entertained watching them fish things out of the moat with their branches. I've posted photos of this activity before, but it's one of the more entertaining solo acts the chimps perform. Sometimes they start with a small stick that turns out to be inadequate and it's interesting to watch them work their way up, scavenging the island for larger and larger branches until they achieve success reaching the floating item. 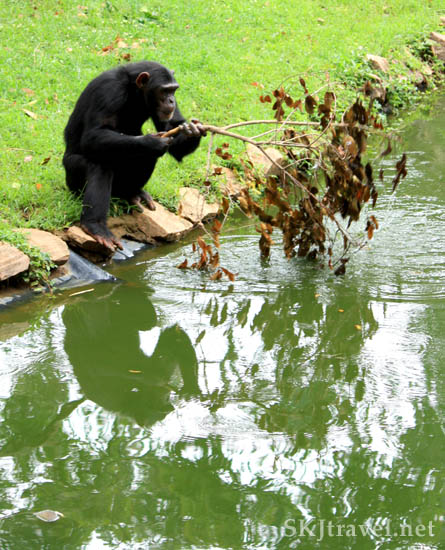 One day near the end of my stay, Helen told me to search through the trash cans at the zoo for discarded water bottles with lids. Fortunately, Steph and I had both been accumulating them in our rooms for recycle. So I didn’t have to search the trash. When I showed up with 13 pristine bottles a few hours later, Helen was singularly impressed. We filled them with cooled porridge and then put them in the freezer … essentially make porridge popsicles. The challenge for the chimps was to get the treat out of the plastic. Basically this involved simply tearing the plastic apart and demolishing the bottles.  Perhaps not very challenging, but added some variety to their days. As usual with treats, the zookeepers spend a lot of effort making sure each chimp gets one, throwing them across the moat with precision aiming and waiting until the dominant chimps have moved off with their treats (as they inevitably grabbed the first ones) to throw to the others. We made 13 bottles for 11 chimps. Who ended up with both of the extras? Matoke, the alpha male, in the first photo. Second photo, Nepa finally gets her bottle and immediately scampers up a tree, using the fire hose with her feet to help her climb. She knows she can only retain her treat if she is hard to reach up in the tree branches. 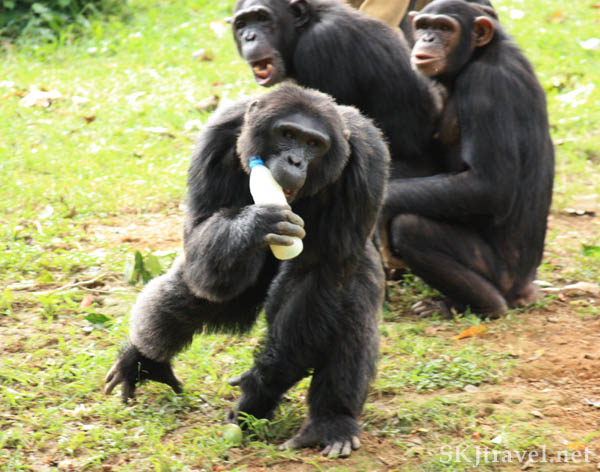 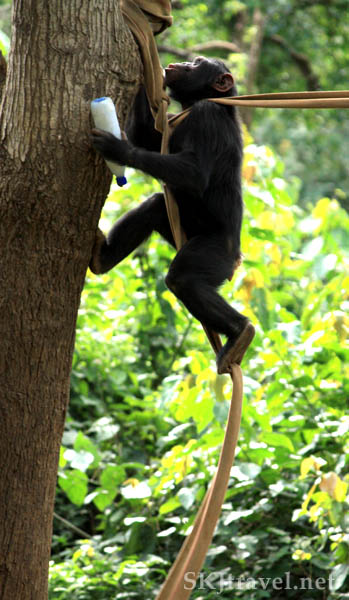 The most entertaining times, though, were usually when the chimps were in all out chaos with a whole bunch of them involved in chasing and scolding one another ... chimps everywhere running around the island screeching and chasing, climbing up and down trees, jumping across branches, usually at high speed. That wonderful deafening sound of everyone being riled up. First photo below, looks to me that Aluma, standing on the rope, is schooling another chimp and saying, "And another thing ...!" before continuing his scolding. The second photo I like for portraying a fairly good sense of general mayhem. And the third cracks me up, Matoke chasing another chimp around and around the tree while little Nepa takes refuge part way up the trunk, you can just see her foot and her head peering down on the action. 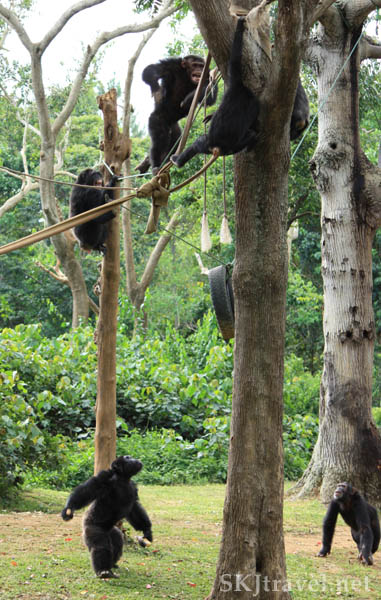 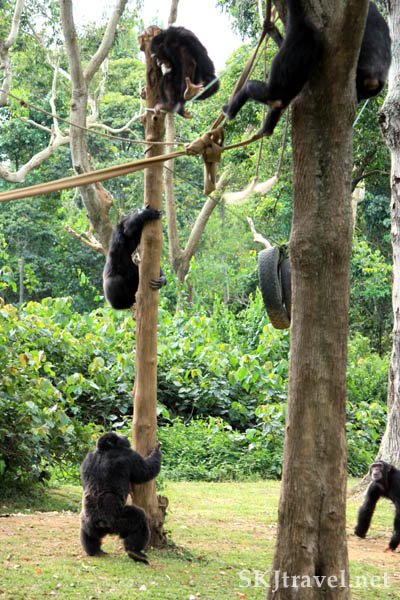 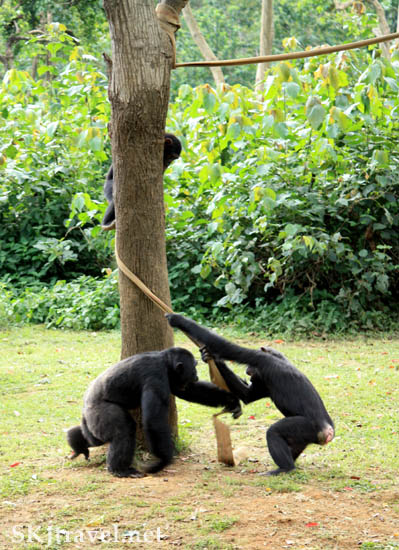