A few random notes … one thing that has surprised me is the fact that Iceland is pretty much self-sufficient agriculturally. I imagined they would be importing nearly all their produce and food, but actually they can grow nearly everything right here, are very conscious about “organic” quality in both meat and produce. So far our meals, and we’ve been eating at the cheaper end of the scale, have been delicious. Tonight, Erik proclaimed he had eaten the best baked potato ever in his life.

Now let me wander briefly to an aside … Recently a cousin of mine revealed to me that when we were kids, she thought my parents were super mean because they only let me have bread and water. But the truth was, the only thing I ever wanted was bread and water. Didn’t even like butter. I ate dry toast and liked it. This is to illustrate that bread has been my number one culinary comfort my whole life. So I feel it’s slightly significant to say that there is something special about Icelandic bread, and it is the best on the planet … I’ve been to countries “famous” for their bakeries and they don't hold a candle. In Iceland, no matter what type of bread, no matter how warm or cold, its texture is so smooth and moist and delicate, I would almost call it creamy. Anyway, I don’t know what the secret is, but if necessary, I can subsist on this single item for the rest of the trip. And when I become wealthy, I’m hiring an Icelandic baker to import his ingredients from Iceland and bake bread for me daily at home.

Yesterday we decided to hike a short ways up the hill across from our hotel to check out a huge glass dome. When we got up there, we saw that people were walking around the top outside. Turns out the inside is a museum on the bottom level, a rotating gajillion-star restaurant at the top, and a terrace in the middle with well-priced (for Icelandic standards) food where you can look out over the city. Pleasantly surprised, we sat down for soup and bread yummy bread, and watched the clouds shape shift over the bay. 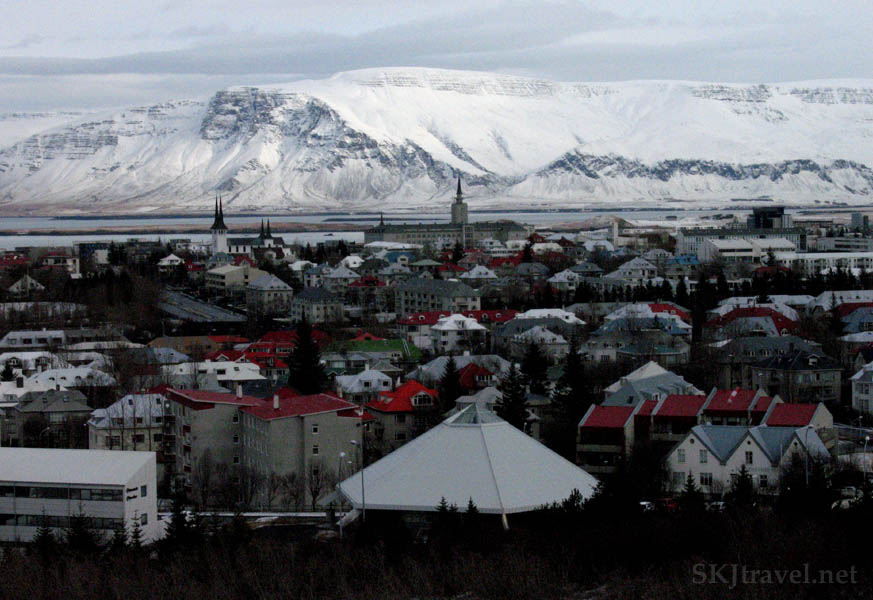 The rest of this day is mostly undocumented in photographs. Too difficult to wiggle a camera out of your pocket with gloves on and hold it up and snap a photo while riding a horse. Too bad for you, because the landscape we rode our horses through was completely magical. I know I’ve already used that word a lot here, but it’s just plain appropriate. Snow-covered lava fields with snow-covered black-faced mountains as the backdrop. The shapes of the rocks in the lava fields are craggly and twisted and random, and the dusting of snow on top was divine.  It was beautiful, but it stays in my mind’s eye,  sorry. :-)  It was snowing when we started out, but quickly the large flakes subsided.

So horses in Iceland are a particular breed and the country has strict standards to ensure its purity … no cross-breeding. They are a very small size, more like a pony. And so shaggy and wooly, even the insides of their ears are furry. I think they are hands-down the cutest and prettiest horses I’ve seen. In a country with a human population of about 330,000, the horse population is about 100,000. So you can see horses are an important part of their culture. These horses also have two more gaits than American and European horses. One is used only in riding competitions, but the other is an extremely practical gait, called a "tölt," and we got to experience a little of it. It’s about the speed of a trot, but the horses have a way of keeping their upper body completely smooth and still. It feels almost surreal to be clipping along, the sound of the horse’s iron-clad feet loudly and quickly clomping, yet feeling like you’re just gliding across the path as though you were riding a skateboard on cement. In fact this gait is so smooth that in riding competitions in Iceland, there is an event in which the riders hold a full mug of beer in one hand and the reins in the other, and race around the track. The person with the least amount of beer spilled out of their mug at the end wins. And the winner usually has pretty much a full mug.

The horse I rode seemed rather fond of me, and whenever I had to walk her, she pressed her head into my side until I petted her more. 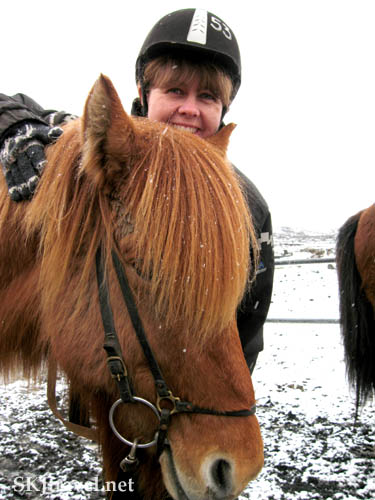 Erik’s horse gave him an adrenaline-pumping finish to our outing when the lead guide’s horse suddenly bolted and the guide couldn’t gain control of it, and Erik’s horse, who was following immediately behind, decided to follow suit, galloping full speed ahead with no care for anything Erik did to try to halt it. Erik said he just thought to himself, “Don’t fall off, don’t fall off; people ride galloping horses all the time and don’t fall off.” When the guide got her horse to stop, Erik’s stopped as well. “You did very good,” she congratulated Erik, “you didn’t scream!” At the end of the ride, we each got a certificate saying which horse we rode, like a little diploma. The guide wrote at the bottom of Erik's, "Thanks for the show!" 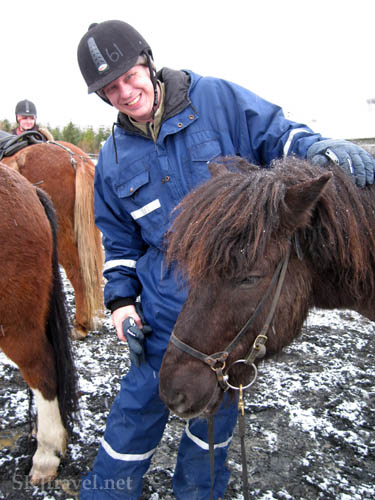 Our previous horse-riding experience consists primarily of po-dunk riding operations in Mexico where they pretty much just slap you on a horse and tell you to follow them, and your horse never really does anything but plod along at a slow walk. This outfit was mega professional. First you receive a very good introduction, and then the whole time you’re riding, there’s a guide at the front of the line, one at the back, and then the sort of “ride master” rides up and down the line (there were 11 of us tourists on horse) pointing out if you’re doing something wrong or how to improve, making sure everyone is positioned correctly and managing their horse correctly. And several times we got to speed up to experience that smooth tölt gait if we could get our horse to do it. They naturally would start that way, but if you didn’t keep the reins properly taught, they would revert to a more nerve-rackingly bouncy trot. The saddles didn't have pommels like western saddles do, so it was a little scarier not having much to hold onto when the going got bouncy. She (the ride master) said at the end of the trip that she had us ride faster than most groups because of the fresh snow on the ground … if the horses walk too slowly the snow packs into their shoes, but if they go faster they stomp the snow out. 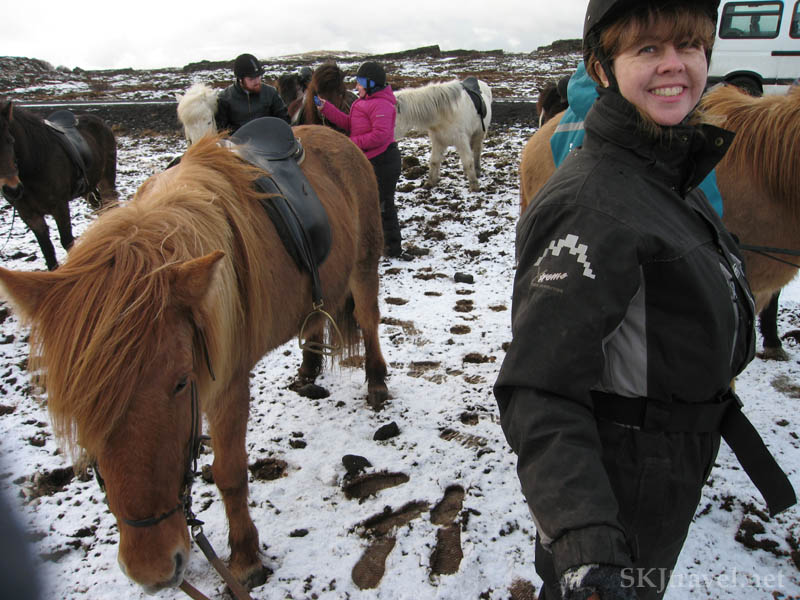