Part 2 of the Penguin Diaries: Spring Life in Antarctica

I fashioned a title for the post, but let's be honest, *all* my photos depict spring life in Antarctica since we were there just before summer solstice! A post has to have a title, but once again, it's just kind of a jumble of pictures that I simply like either because of an action scene, an anthropomorphic gesture or expression, or an illustration of something idiosyncratic to penguins, or for any number of other reasons ... which boils down to my original statement: I simply like them. :)  And they're fun to share.

But ... let's do consider some unique things about spring in Antarctica. The melting snow and ice is, of course, the primary plot upon which penguin lives evolve all their array of subplots. As soon as there is bare ground, they begin to stake out their little bit of territory and build and repair the nests. 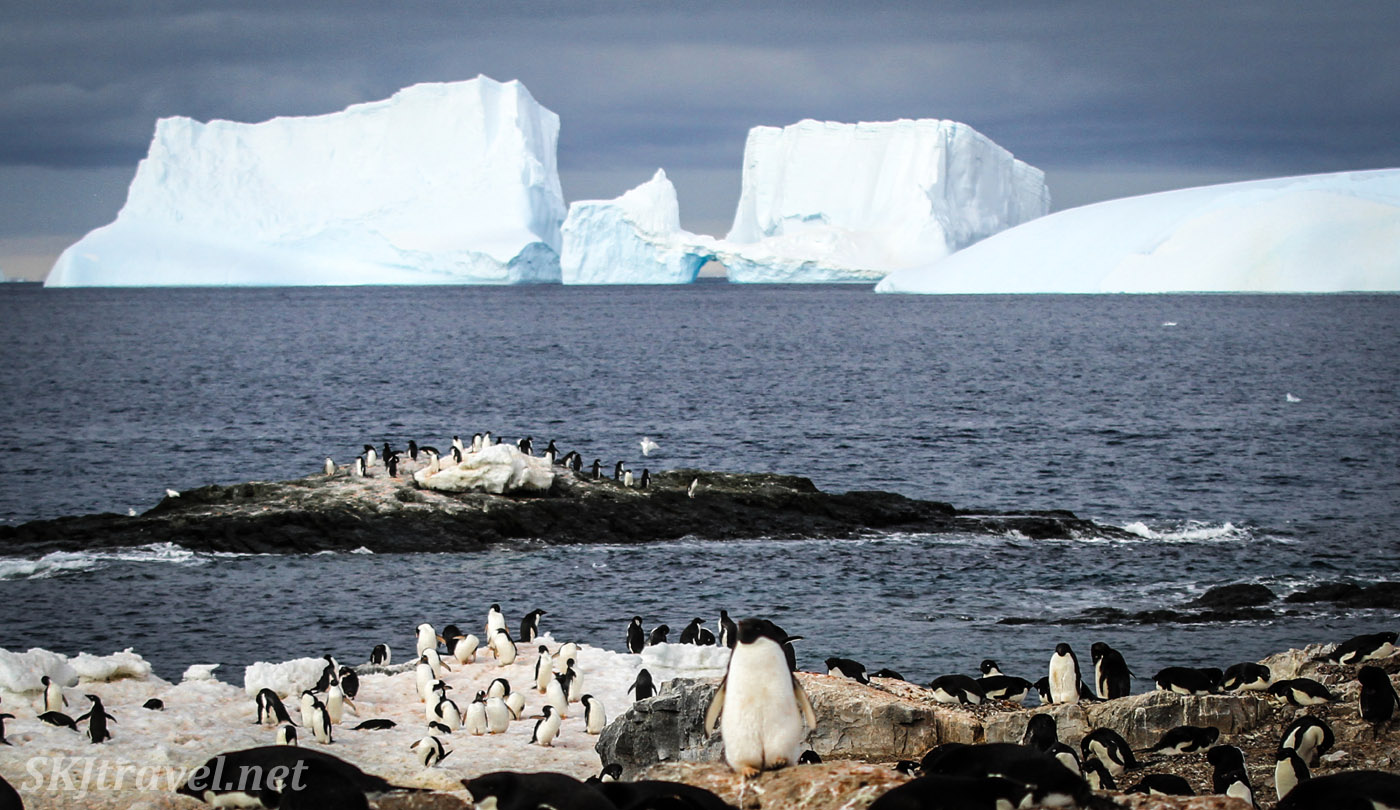 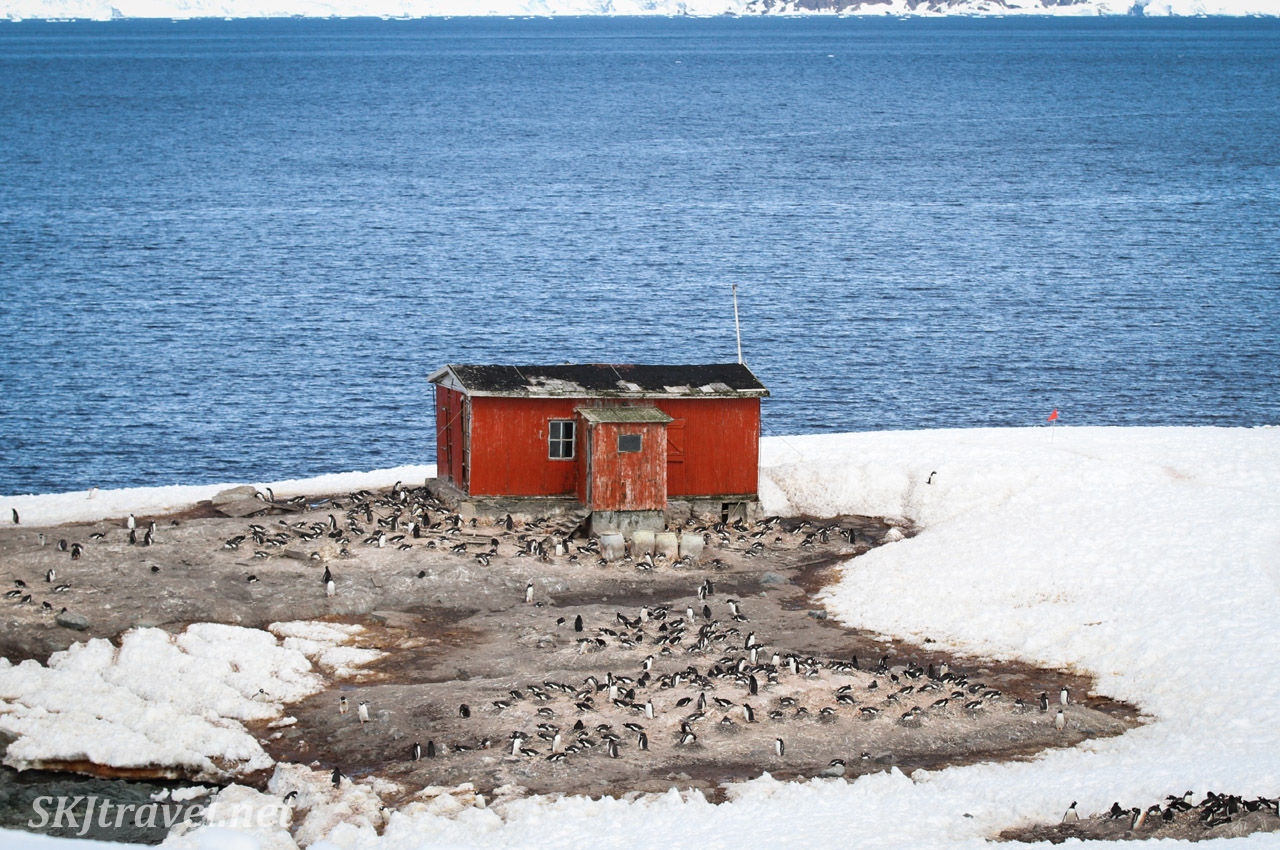 As I was scrolling through thumbnails of my pics, I had to do a double-take on this one, for it looked as if there was a colony of penguins in the sky! This was a common issue in Antarctica -- it could be difficult to tell the difference between clouds and snow. The line where they met on a mountainside was often extremely vague, sometimes you really couldn't discern where snow ended and clouds began. Here, the snow in front looks like the clouds behind. 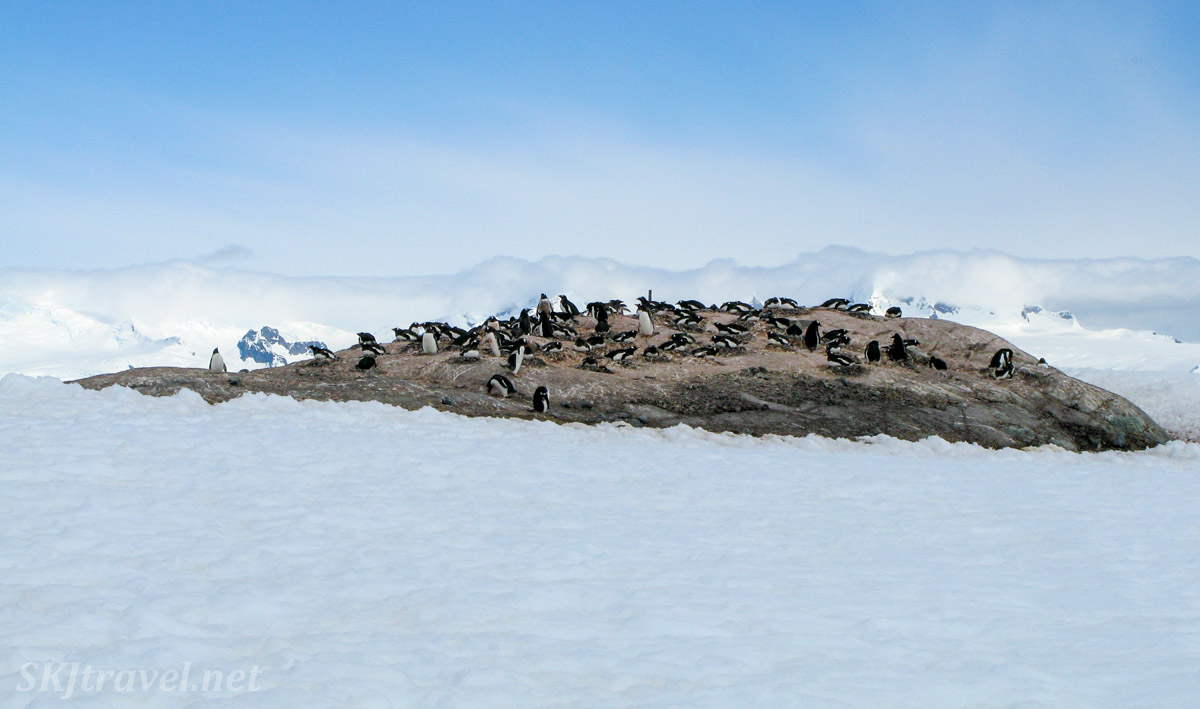 This fellow says, "I'm the king of the island!" 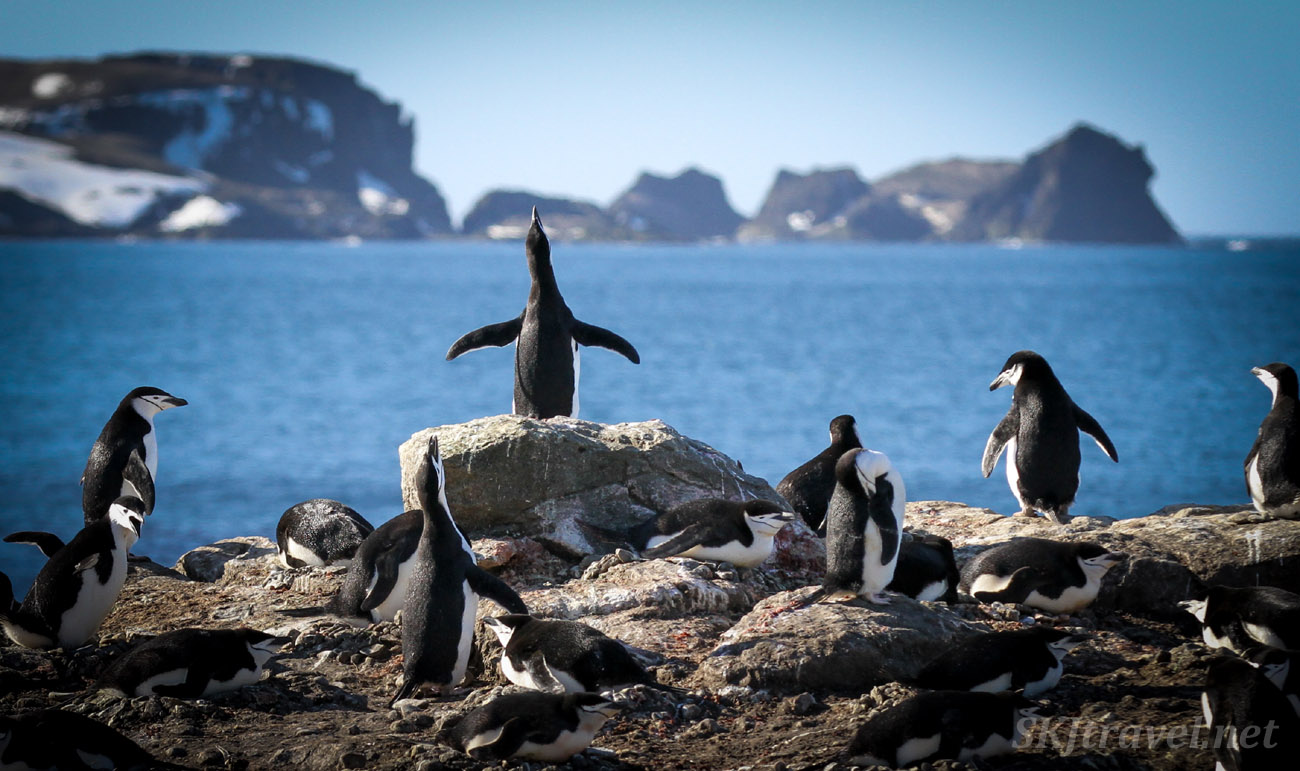 I don't know what these penguins' behavior looks like in the winter after they've given birth to their chicks. But in springtime, it's dominated by building their nests! As I already explained in my first penguin post, Penguins and Their Busy Little Lives. they are consumed with running to and fro, hither, thither, to the beach, to their neighbor's nest, gathering sticks and stones. 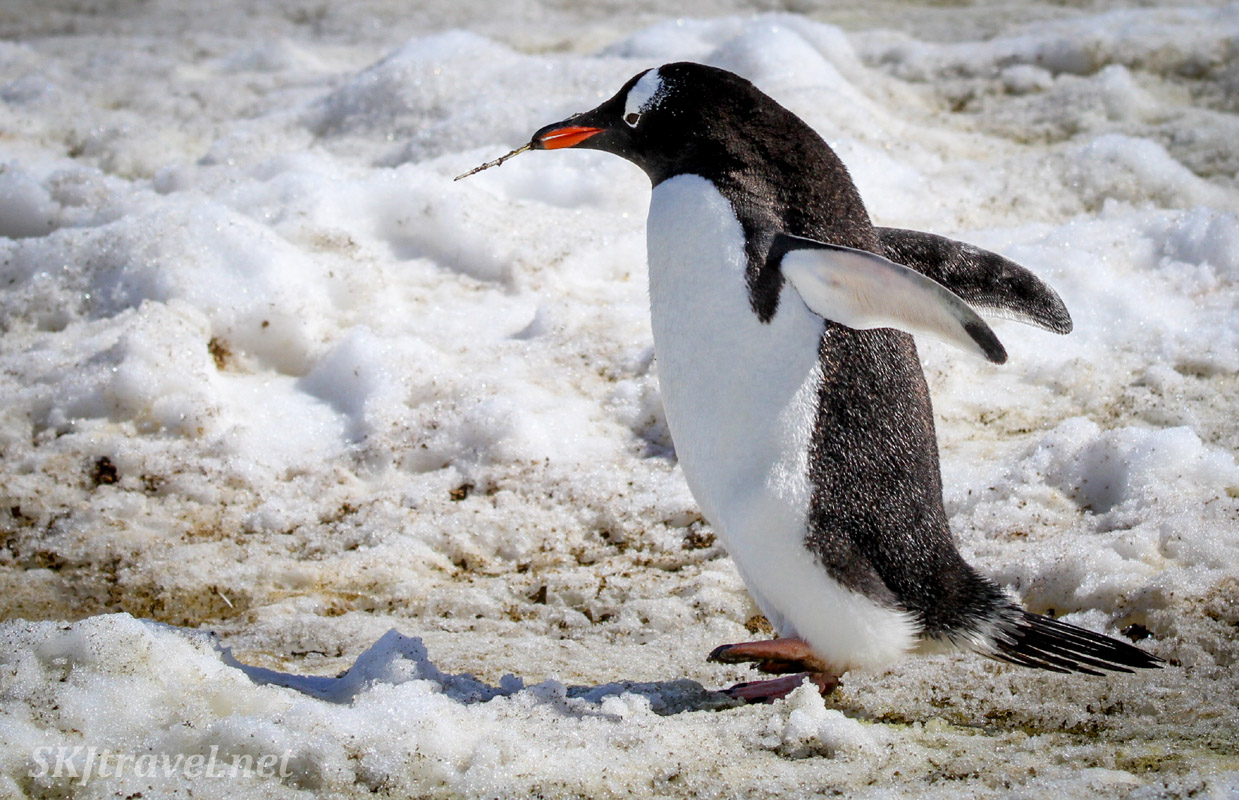 Do they squabble over something else in the winter? Or is the tension in a rookery unique to nest-building season and the great hatching event? (most baby chicks on a given colony hatch at about the same time, and that time varies from colony to colony) I was always amused by the poor nest-sitters who were constantly harangued by their thieving neighbors. So I got a lot of photos of one squawking at another. This one seems to have successfully told off the invader, who looks rather sufficiently chastised with its hung head. 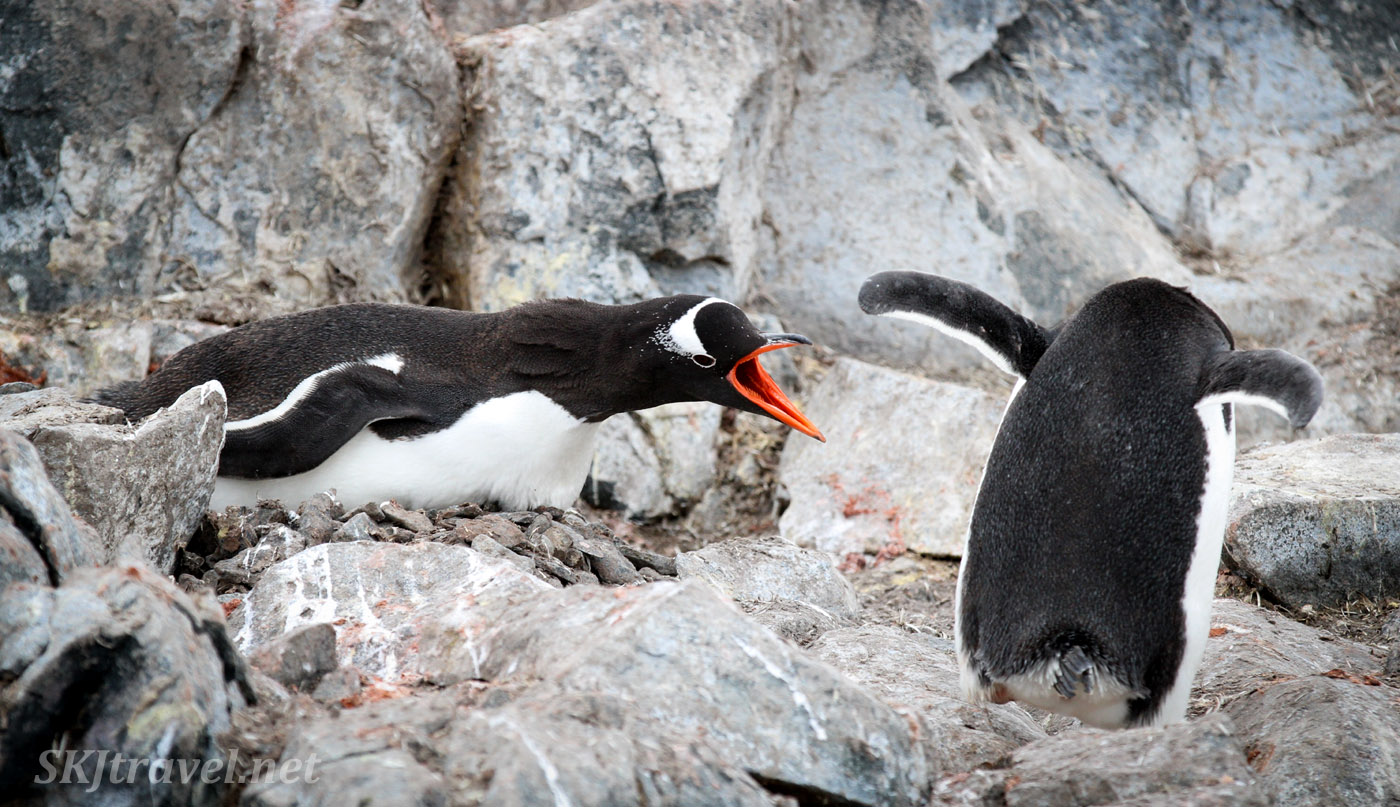 The penguin who's about to get its tail feathers nipped looks so innocent walking by, but I don't know if there's such a thing as an innocent penguin! 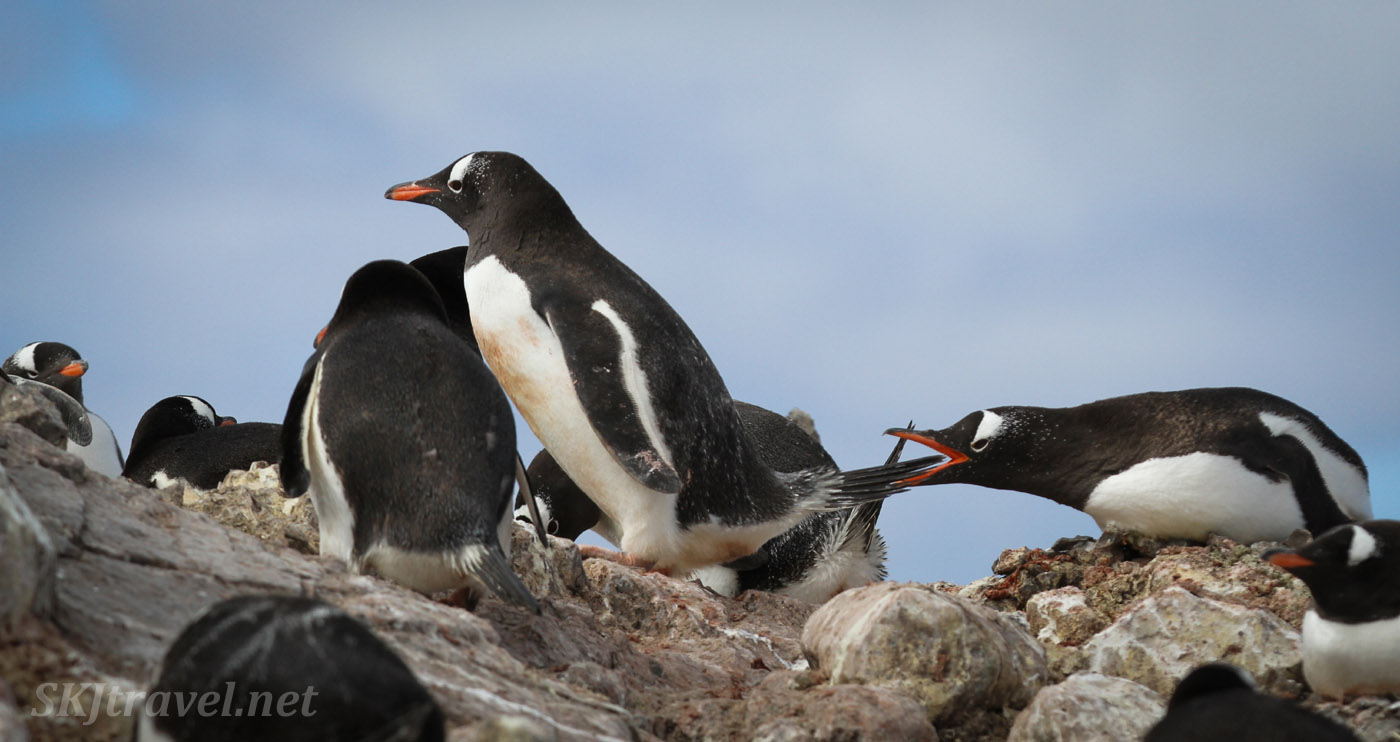 Showdown at the O.K. Corral. That's actually a whale vertebrae the penguins are standing in front of. Who will get the disputed stone? 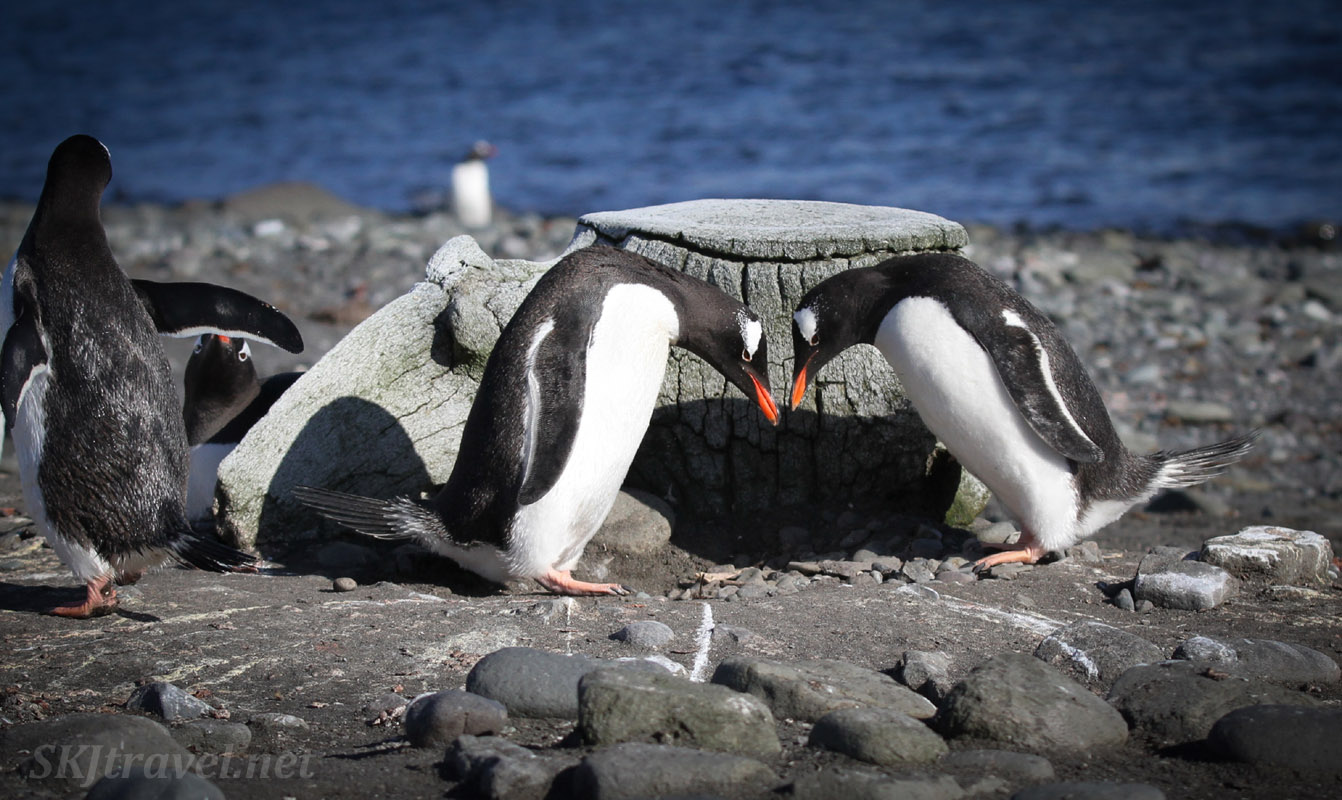 Penguin behavior is endlessly amusing -- the little dramas that play out are sometimes quite lengthy and involved. I guess that's one of the things that makes for the entertainment besides their anthropomorphic characteristics and actions. I watched this chase unfold below. I wish I could put these in a flip-book instead of one on top of another, but here's an excerpt from The Chase that covered significant distance across the beach, cutting through other penguins and their soap operas. Finally the chased penguin flopped onto his belly to try to out-distance his attacker. I think in general they can move more easily across the snow this way, but I'm not sure about on land! Once the chase hit the water, I could no longer keep track of it. But it seemed that the one was fleeing pretty successfully. 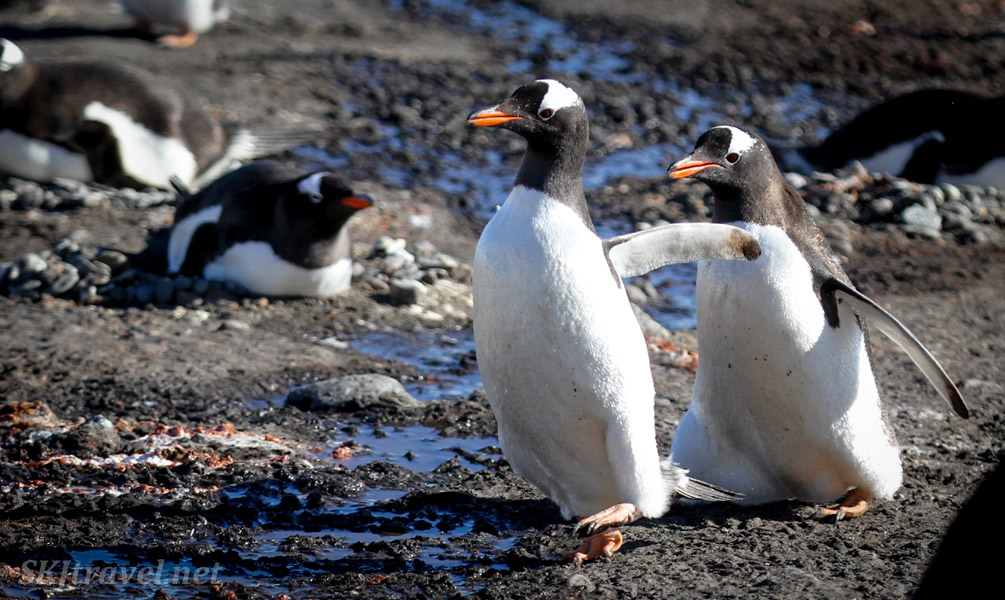 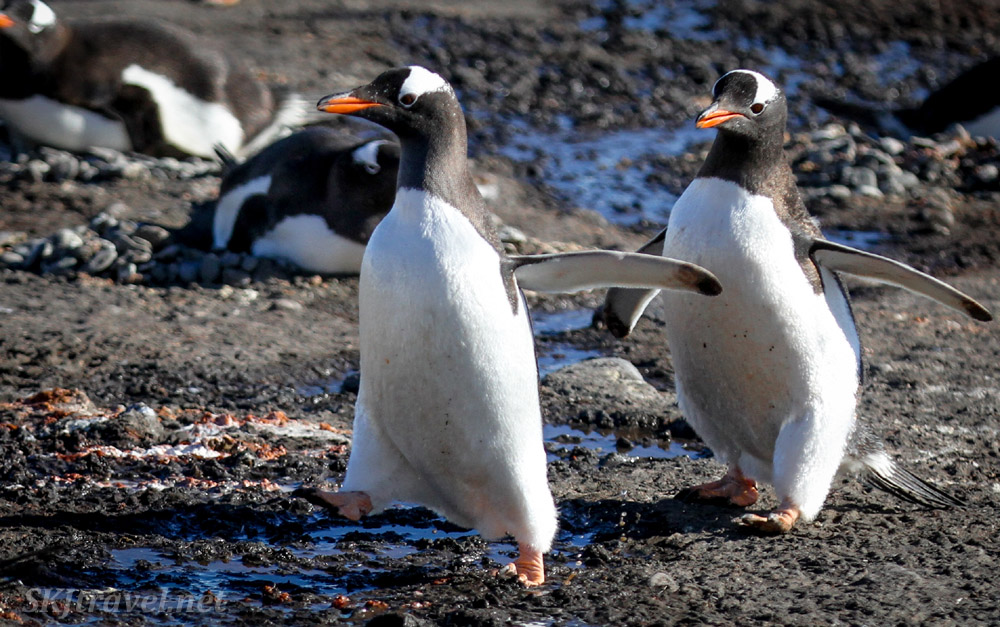 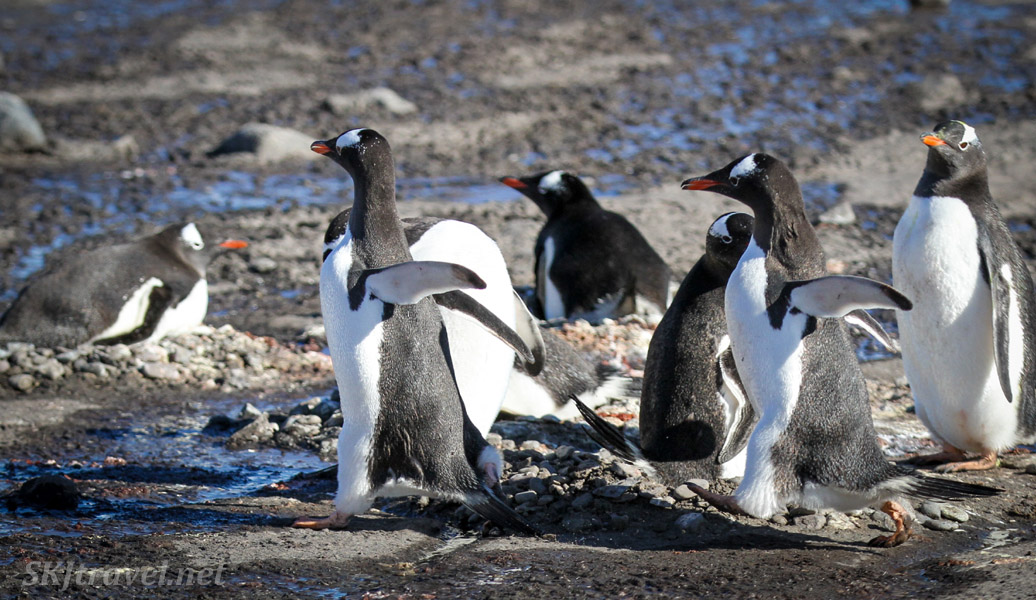 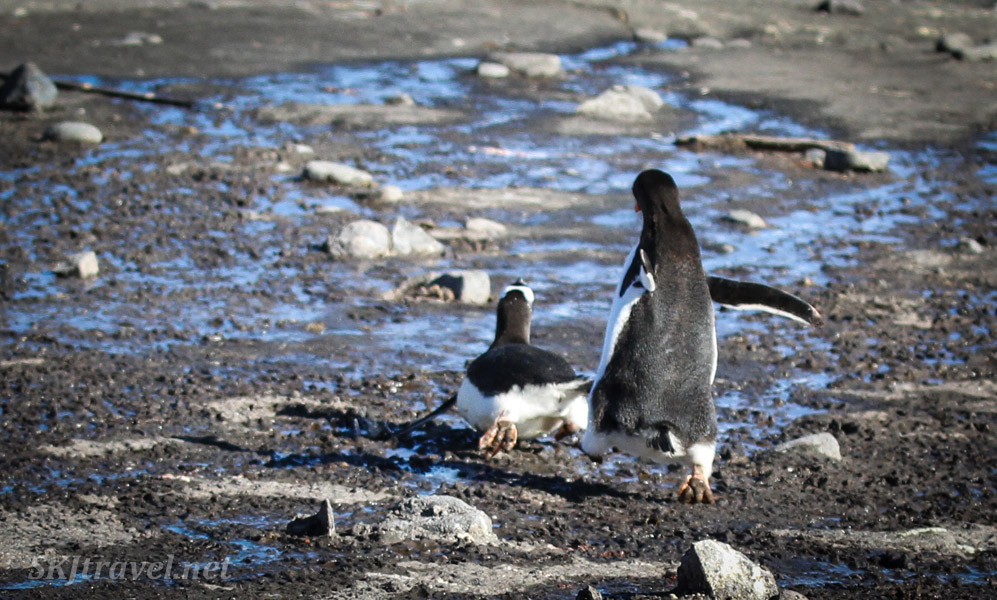 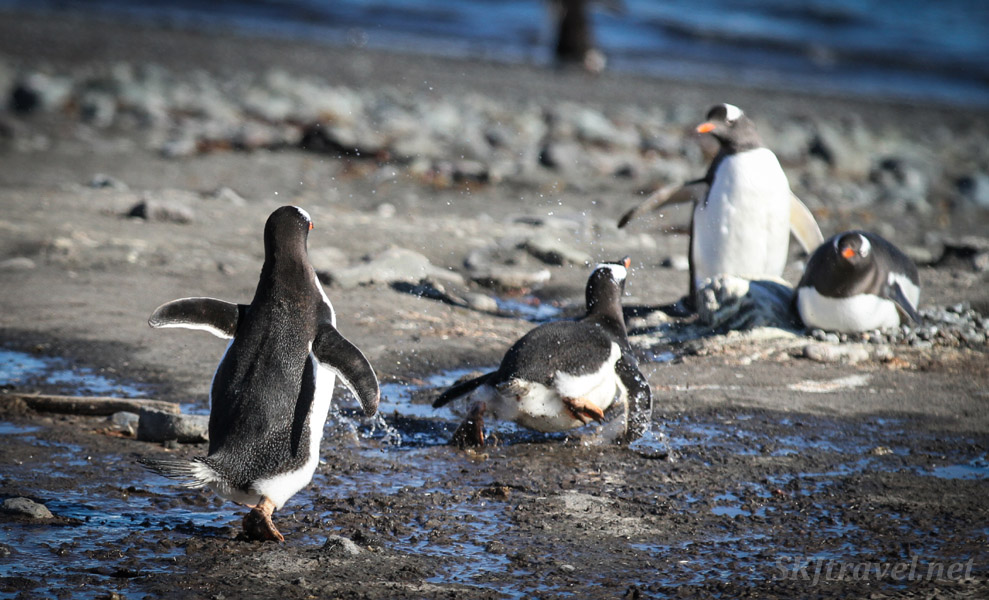 Once in awhile it's not another penguin who is thwarting a penguin's business, but a seal. These elephant seals are not in the market for penguin meat, so the penguins aren't in danger, even though this scene looks like the seal is lying at the terminus of a penguin highway, mouth open, just waiting for a careless penguin to stumble too close. But this penguin is too smart -- it's another showdown:  penguin v. seal. 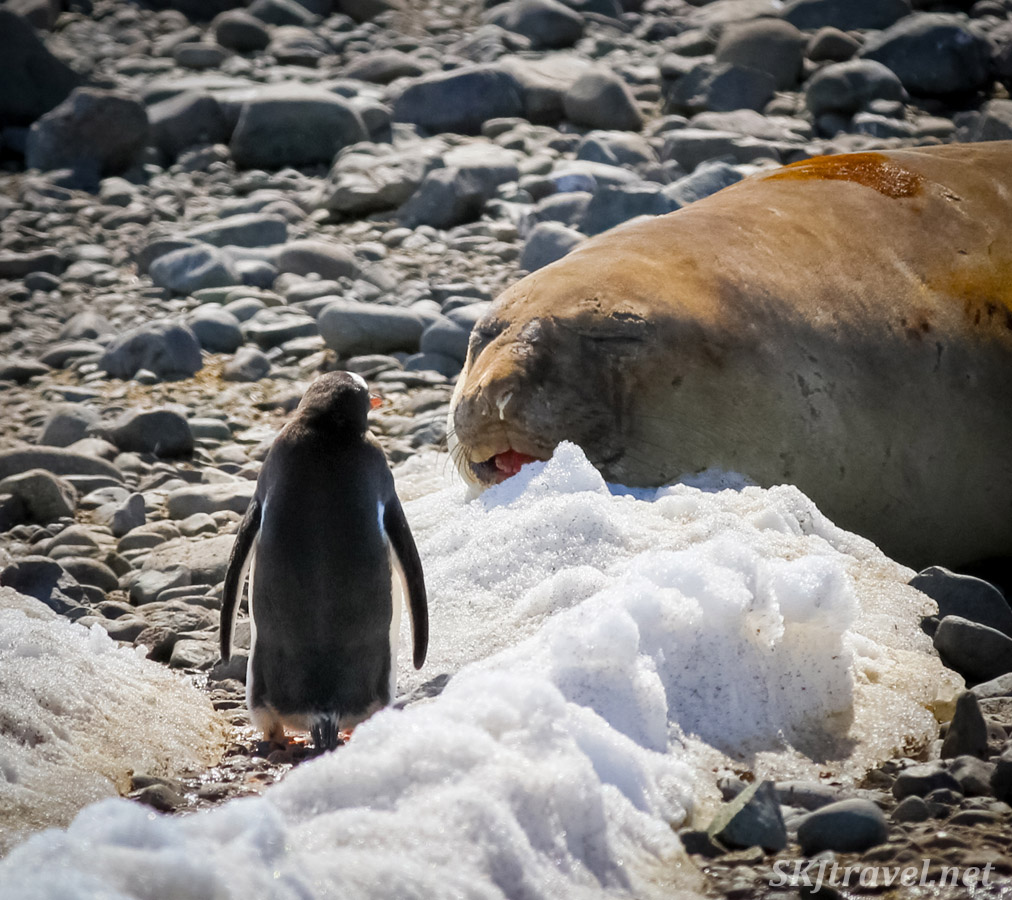 Springtime is perhaps the most dynamic time of year in Antarctica as the snow melts, sea ice breaks up, glaciers calve, icebergs are set free to roam the ocean. Although a person keen to get photographs of penguins can see them closer, see their expressions and gestures and little life dramas when on land with them, I think actually the favorite photos of this particular keen person, in the end, are the photos of them on the ice. It just seems somehow more iconic. I've seen penguins in South Africa who obviously are not riding on ice. So to me, the Antarctic penguins are best illustrated on the ice. These are some of my favorite pics. (though other penguin+ice pics are scattered throughout other posts). 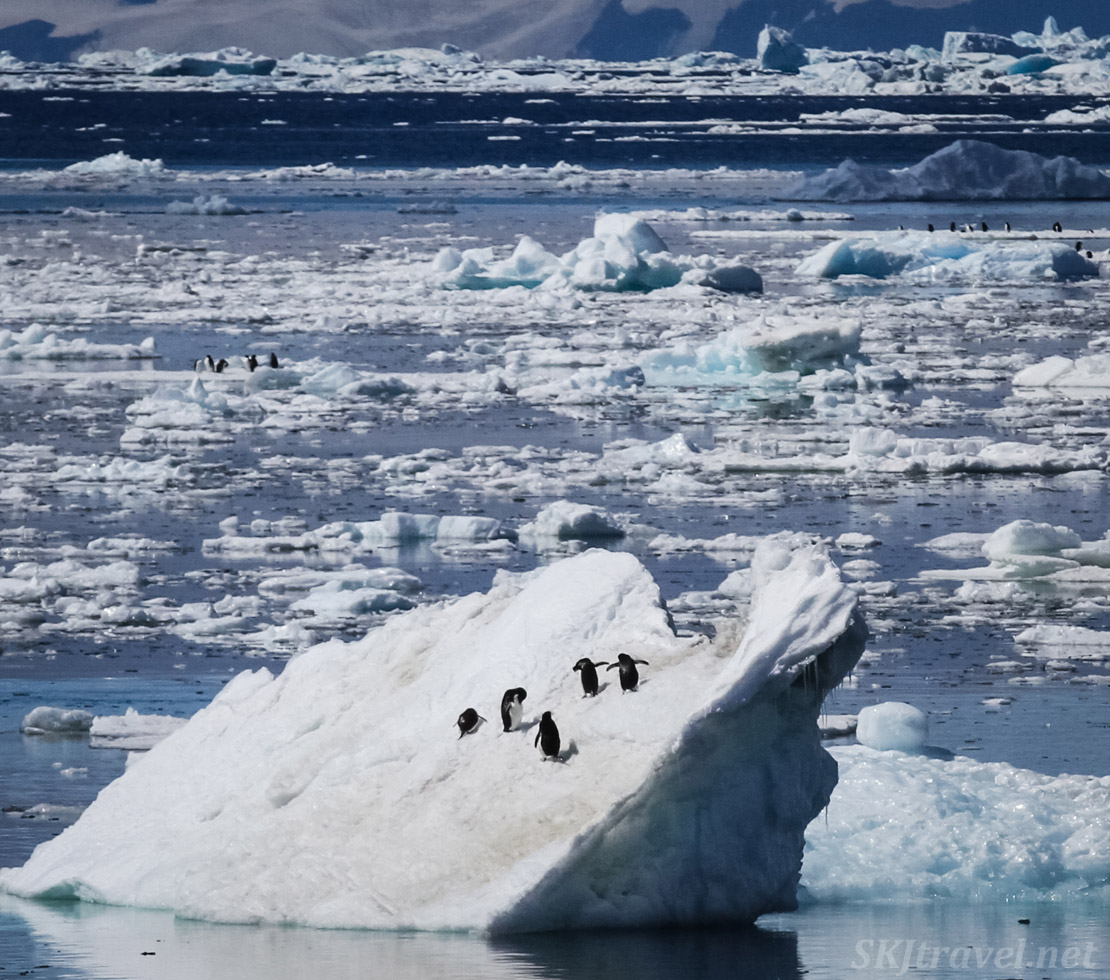 I said in my first Kayaking Club post that I failed to capture a shot of the penguins jumping out of the water like dolphins around our kayaks, but it turns out (I didn't even realize it when I published that post) that I managed a couple shots of them from the ship. You may have to look closely to see them in the foreground. This pic is a particularly good candidate for viewing larger (right-click).  :) 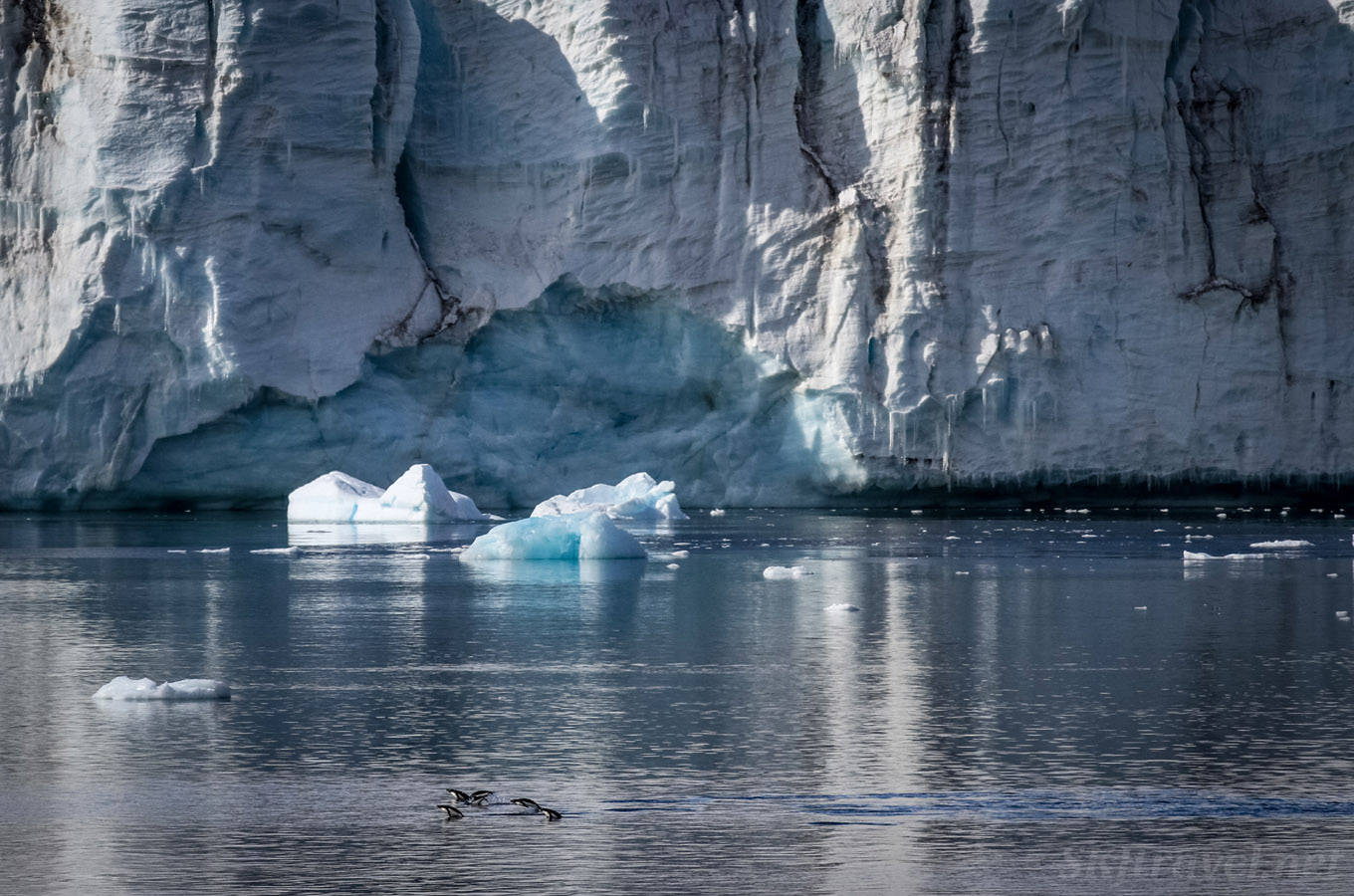 This gang is just getting ready to dive in. "Geronimo!" 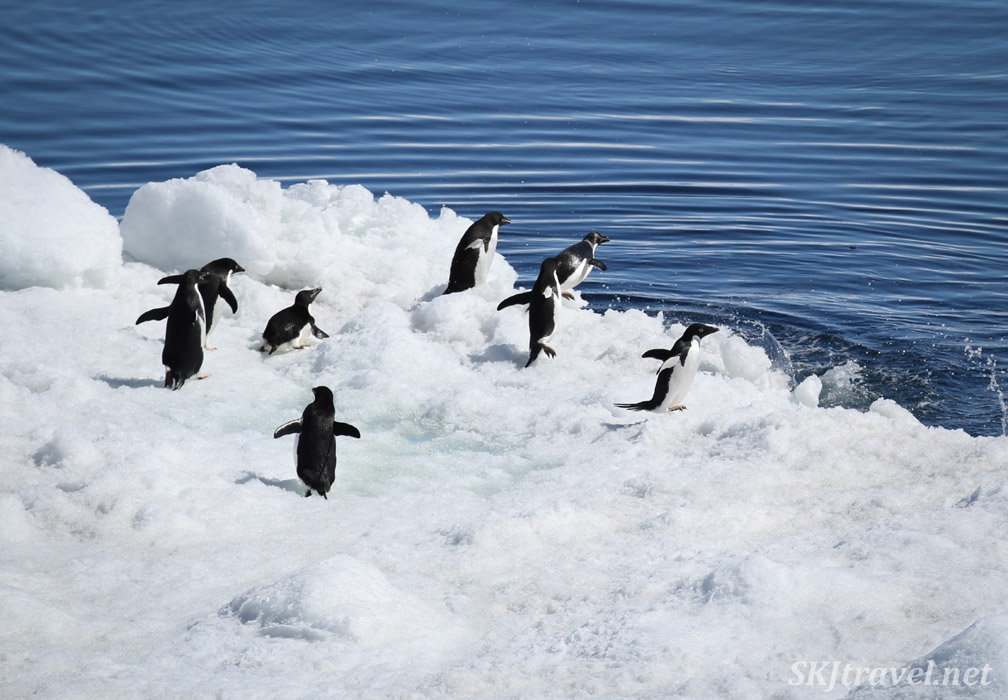 These two completely crack me up. They are sentries or else trying to pretend they are globs of snow like the ones beside them. 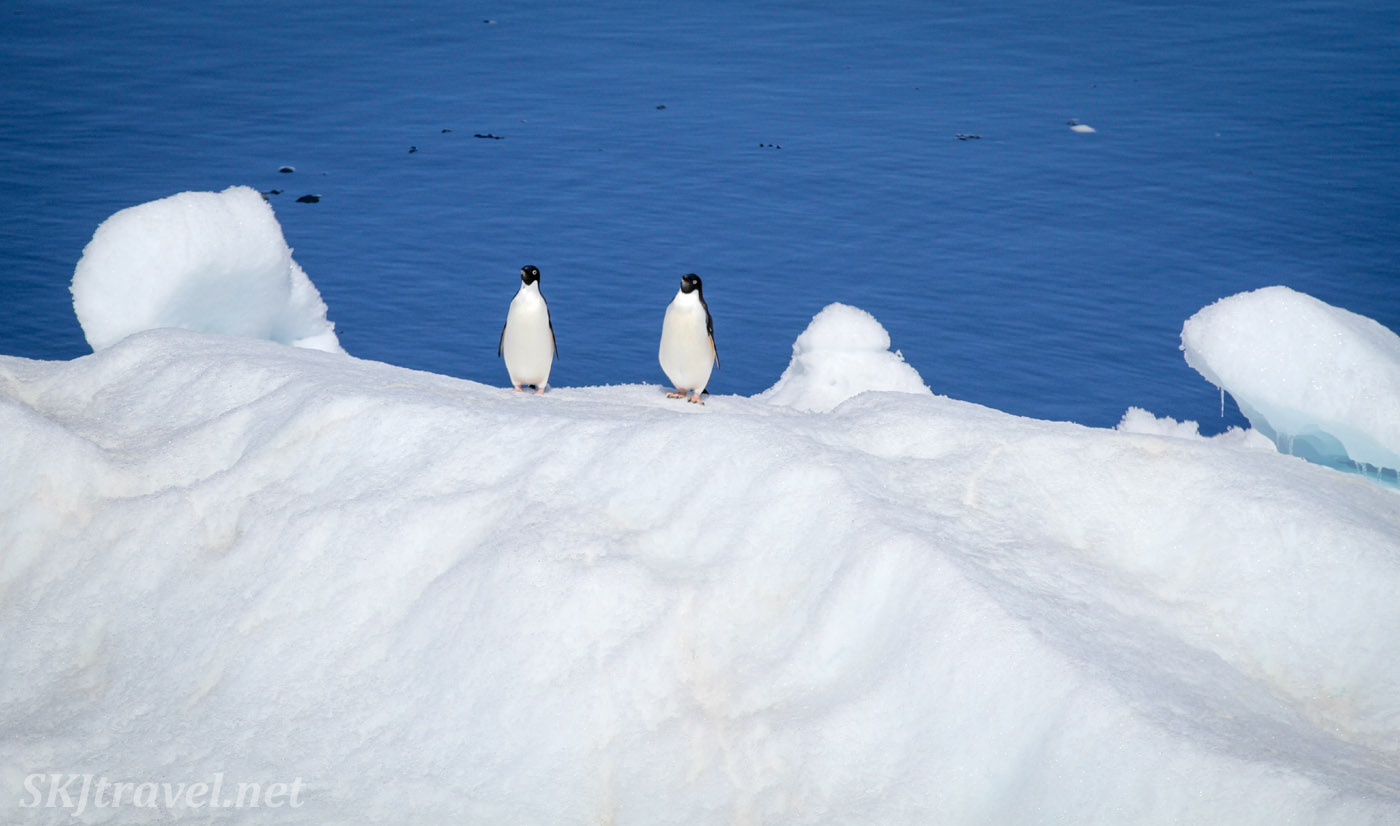 Another thing about spring in Antarctica is the arrival of human tourists! The penguins, you may have noticed through my posts by now, have zero fear or wariness about humans. Which is so awesome. They are unconcerned yet often curious. Somebody in our landing party set this camera up and left it, presumably filming whatever walked in front of it. This penguin was first curious, even suspicious, and then I swear, became completely enamored with this camera and tripod. I watched him for several minutes try to tear himself away from it, but he always came back to eye it. 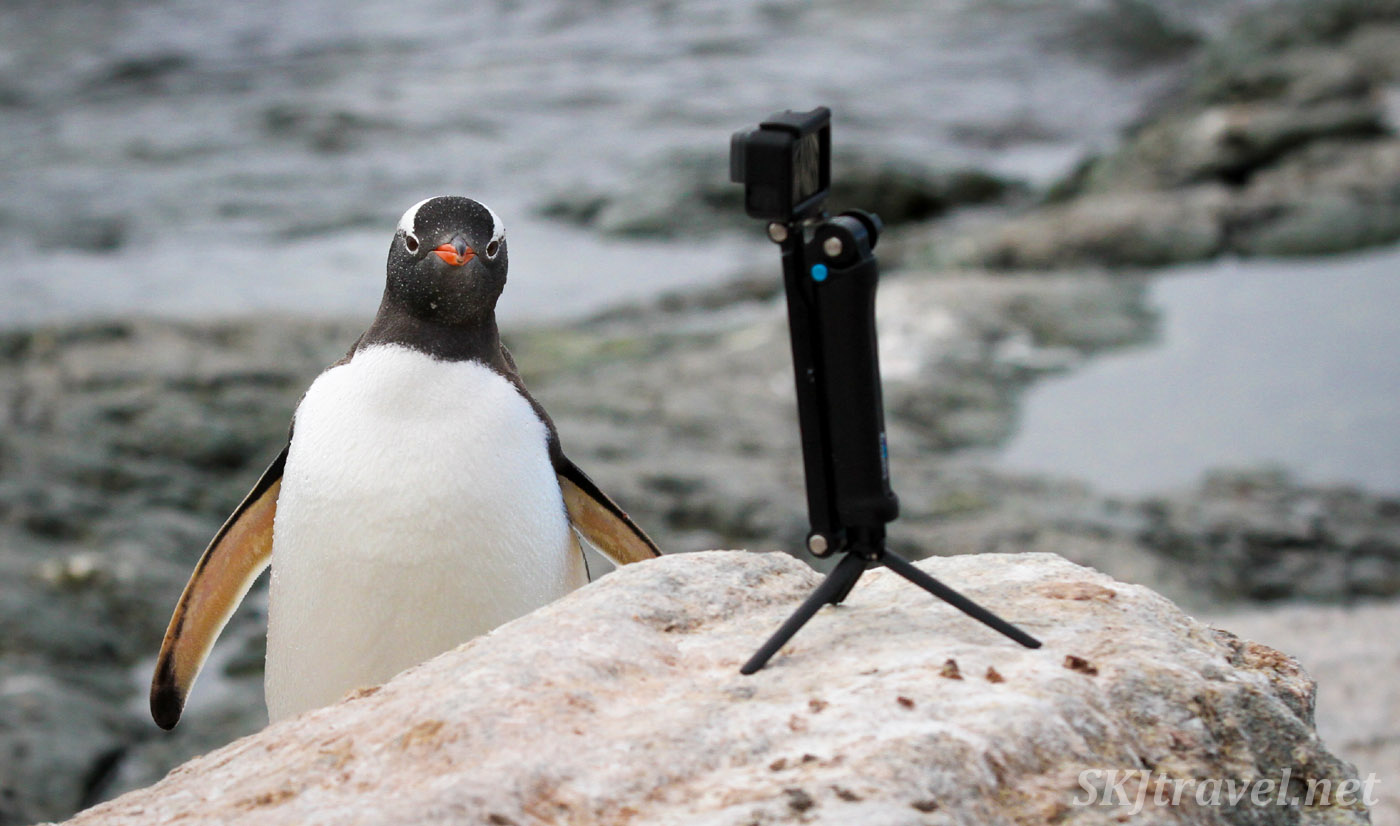 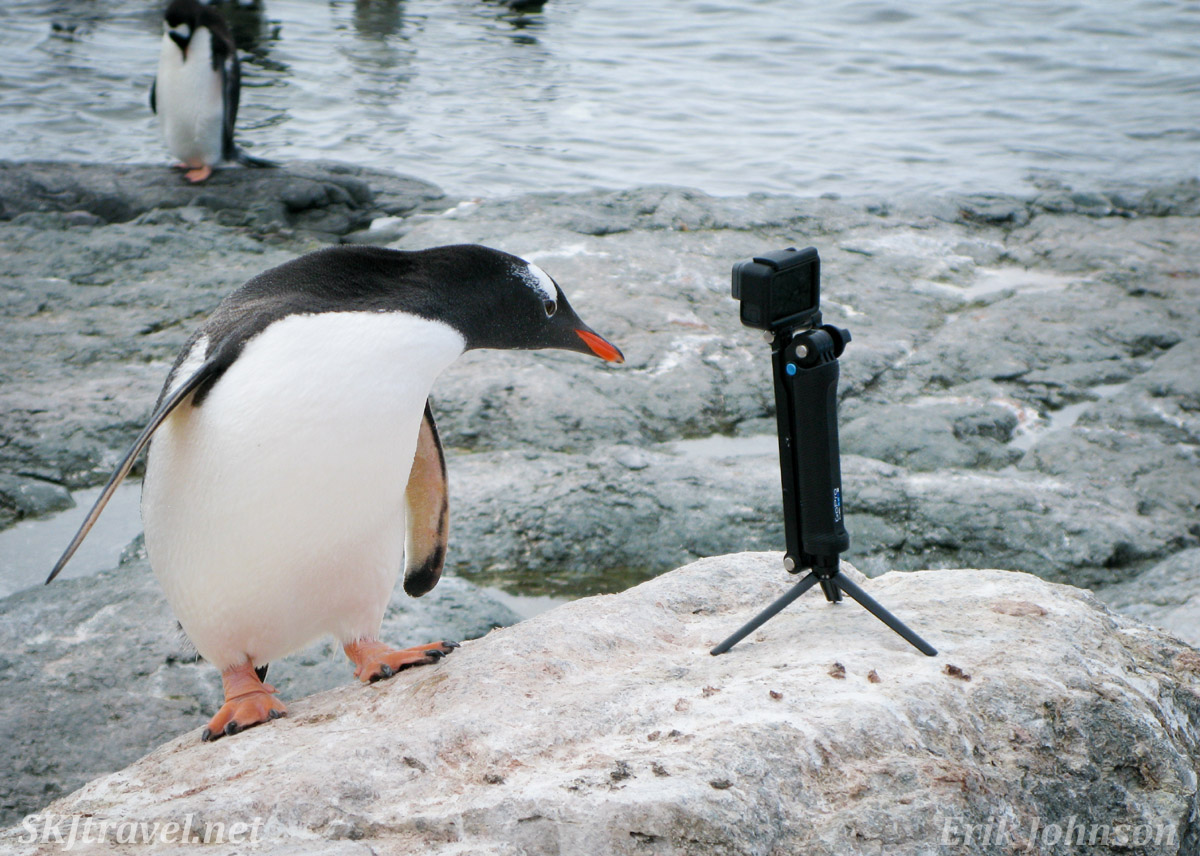 I think this penguin is earning a little cash on the side as a tour guide. "And behind us, we have the stunning Mount Bordenstock." (I don't know for sure what the peak's name is, that's just what the penguin called it.) 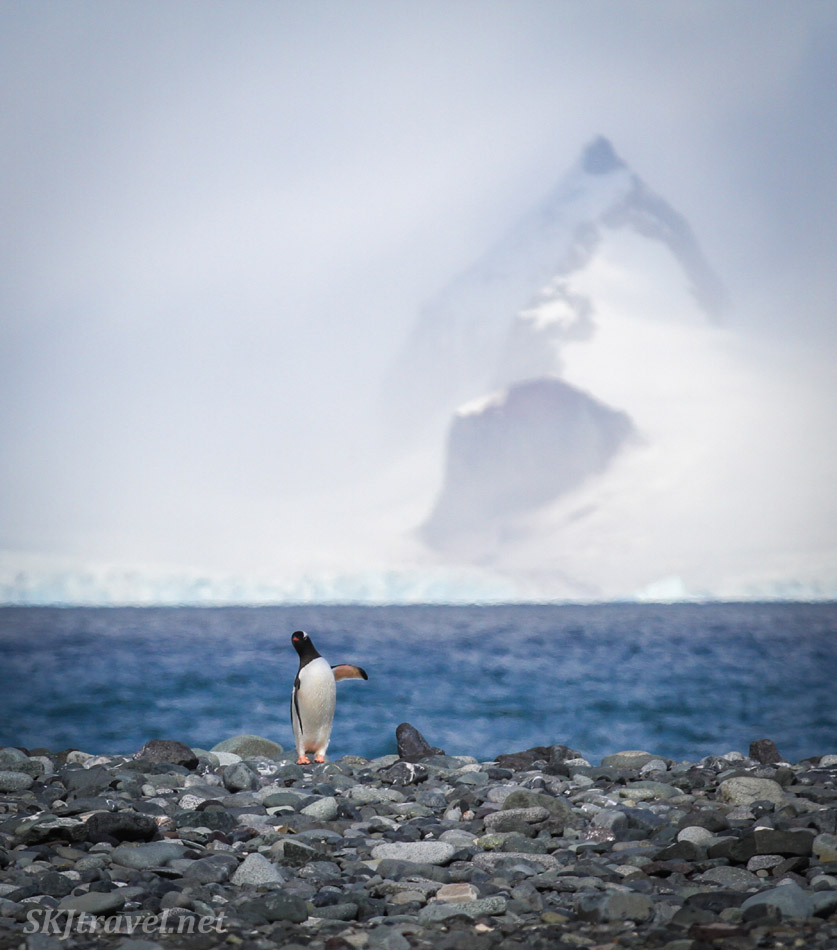 And these two are making some spare change as snow performers, with a little bit of ballet and interpretive dance. (their tip jar is just out of view) 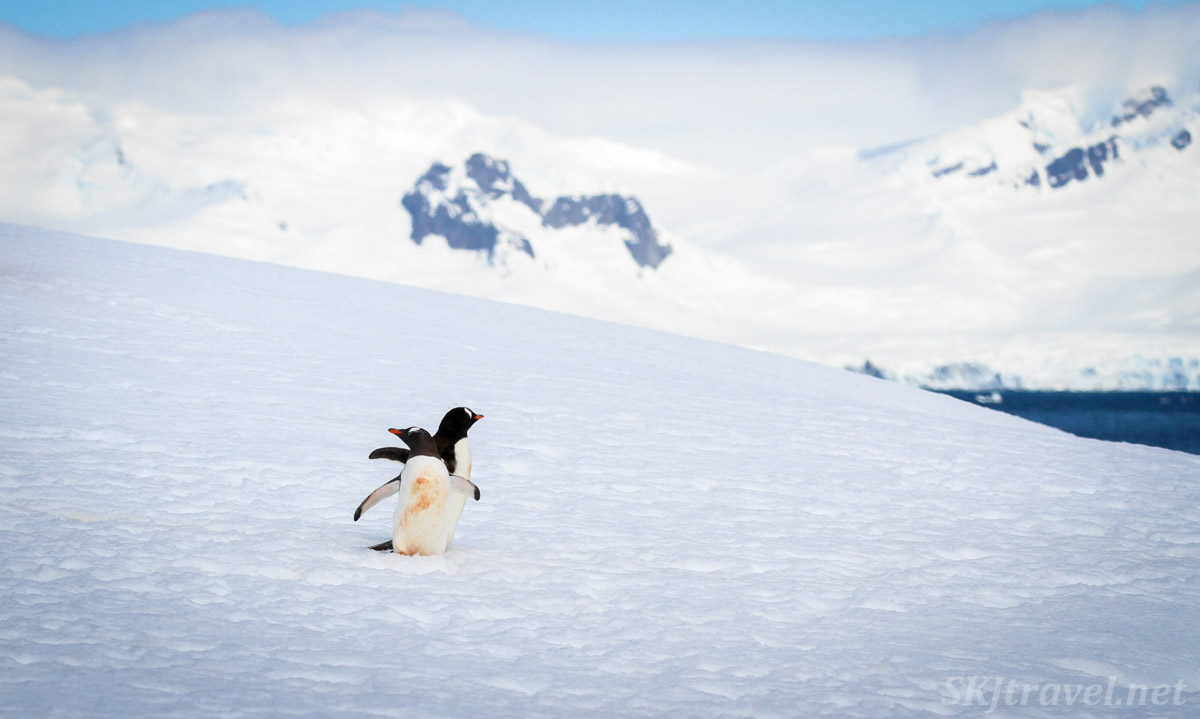 This gentoo is entertaining us with the penguin version of a rather rounded Shuttle Tydirium. (Star Wars reference for all you SW nerds like me.) Penguins, especially the chinstraps, definitely have an Imperial quality about them. (like Erik's incarnation of Darth Penguin) 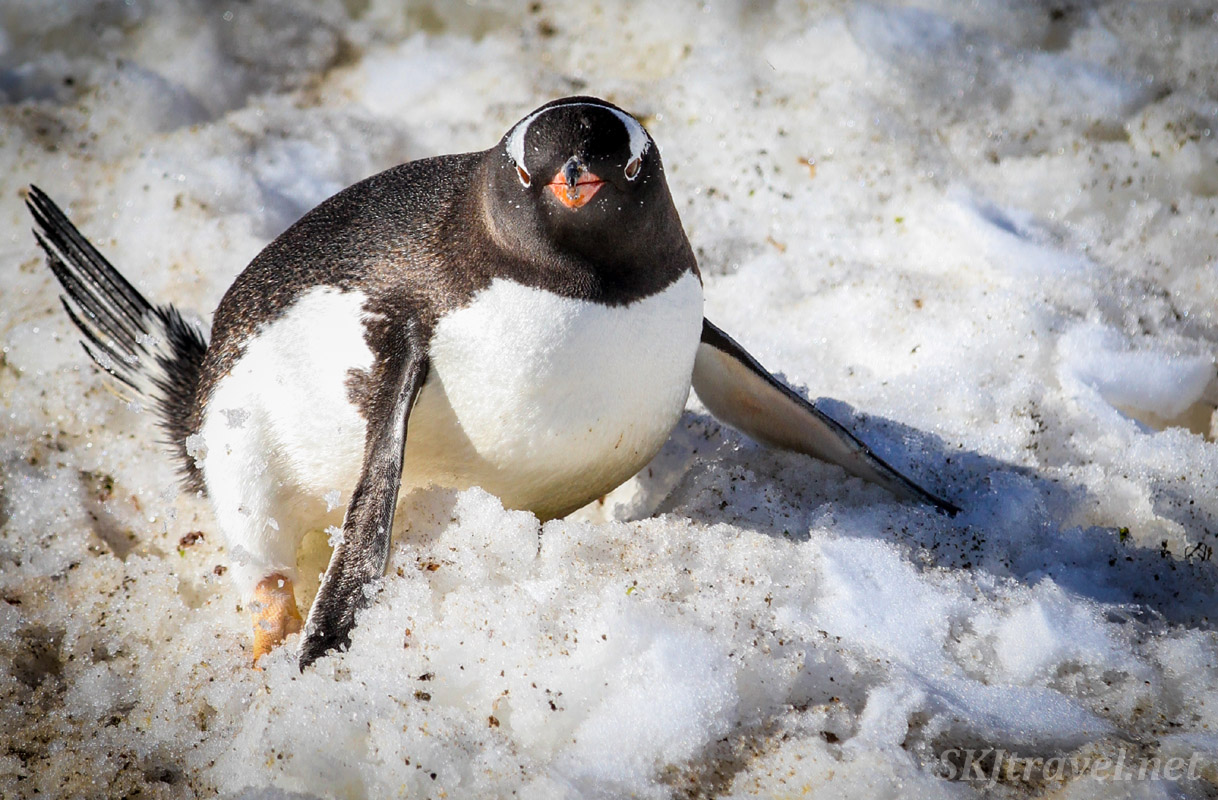 But of course, the primary event in the penguins' lives in the Antarctic spring, as in the world over in all climates and with many critters ... after obsessively building their nests, they welcome into the world new life. New little critters to populate our planet with their special uniqueness. It seemed about half of the penguins in their nests in Yankee Harbour were harboring (heh) chicks beneath them, in a variety of ages from almost half the size of an adult to only just exposed to the light of day. The day we kayaked at Brown Bluff, the rest of the ship passengers got to see baby penguins. And I was a bit bummed that I missed out on that when it started to seem like that had been the sole opportunity. But lo and behold, the last day of the expedition cruise, we landed at Yankee Harbour in the South Shetland Islands, on the way back north to Argentina, and there was a whole colony tending to their babies. I was beside myself. My photos of the chicks lack crisp focus, sadly, but it's a pretty mild disappointment in the face of having seen them with my own eyes, heard their din of little peeps across the island, and captured at least the essence of what they look like.

In this first pic, just one of a set of twins has broken its shell, and the little hatchling is keeping its sibling warm. 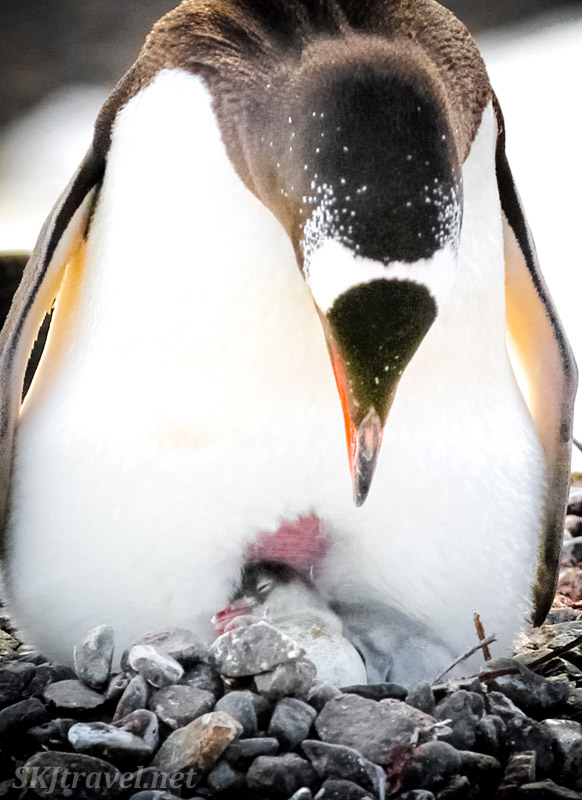 Mostly, if a chick was out from underneath its parent's pouch (could be either mom or dad, they both do nest duty), it was crying for food or looking pitiably upward at its parent's beak in obvious hope of an impending meal. 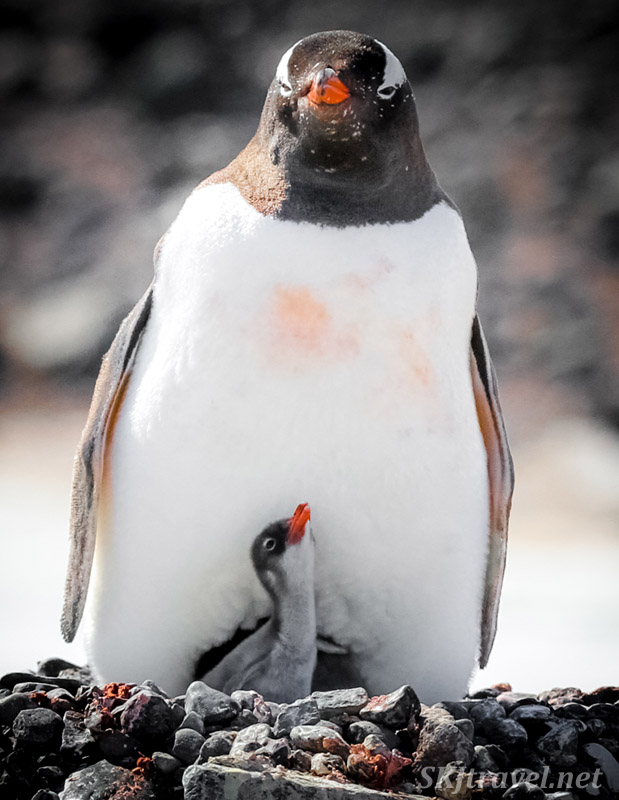 This chick got its wish! Mmmmm ... reach on up there, little chick, into mommy's open mouth to get that yummy half-digested food stored in her throat. Mmmm, making me drool right now. HA. I'm really glad I'm not a bird -- their infant formula seems particularly unappetizing. 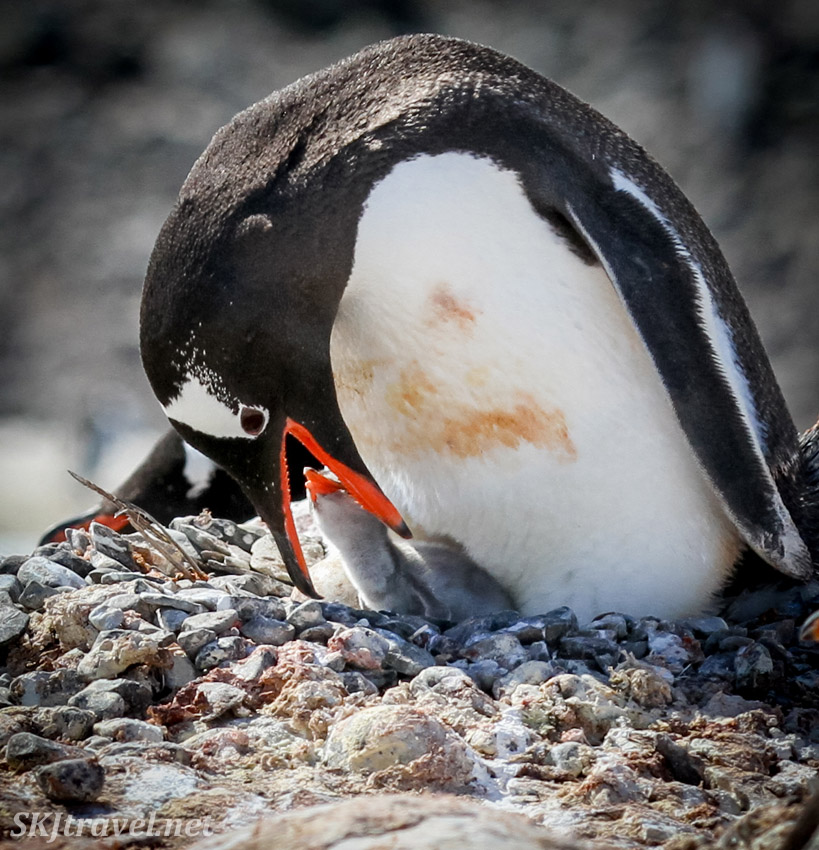 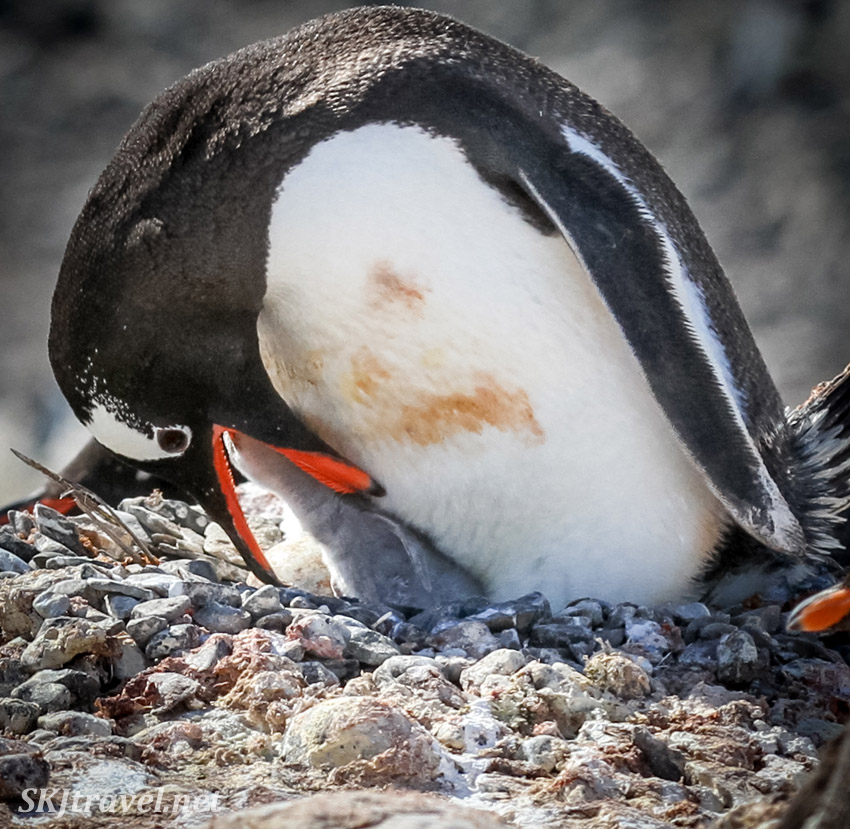 This little quiet hatchling is just stretching its wings. Dreaming of being an airplane, haha. 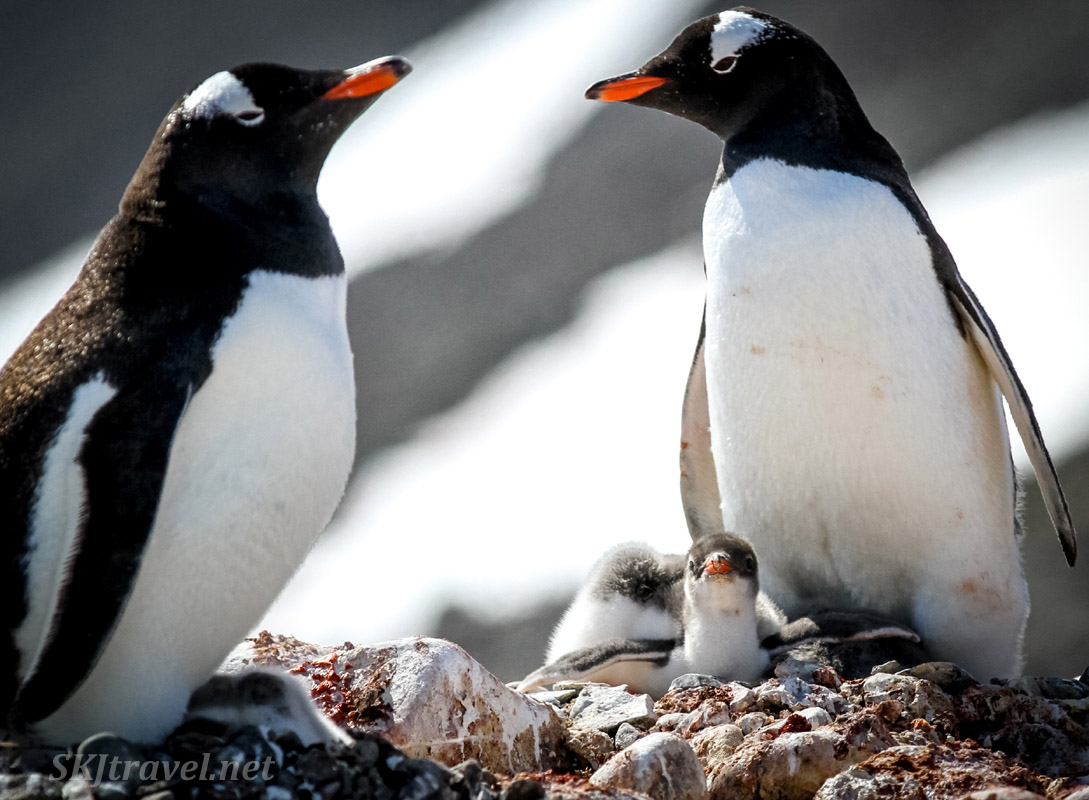 One more post dedicated to penguins to come ... stay tuned. :)

See more penguins in Part 1 of the penguin diaries!

See even more penguins in Part 3 of the penguin diaries!