High on my list of places to see in my home country, the United States, has been the old growth redwoods and sequoias in California. I just crossed the redwoods off my list as Erik and I recently took a brief trip to San Jose and spent a day in Big Basin Redwoods State Park. Which are the bigger trees, the redwoods or sequoias? I didn't know until I just Googled it; here is what I learned: The sequoias are the largest in diameter and overall volume, while the redwoods are the tallest. Sequoias have a longer lifespan by almost a thousand years! Redwoods live up to about 2,000 years and the sequoias to 3,000. The redwoods grow along the Pacific coast, while the sequoias are found further inland at a higher elevation.

This was a day when I really appreciated my wide-angle lens, but it could seldom fit in a whole tree. It's just astonishing when you look up and up and up and still cannot see the top of the trees. 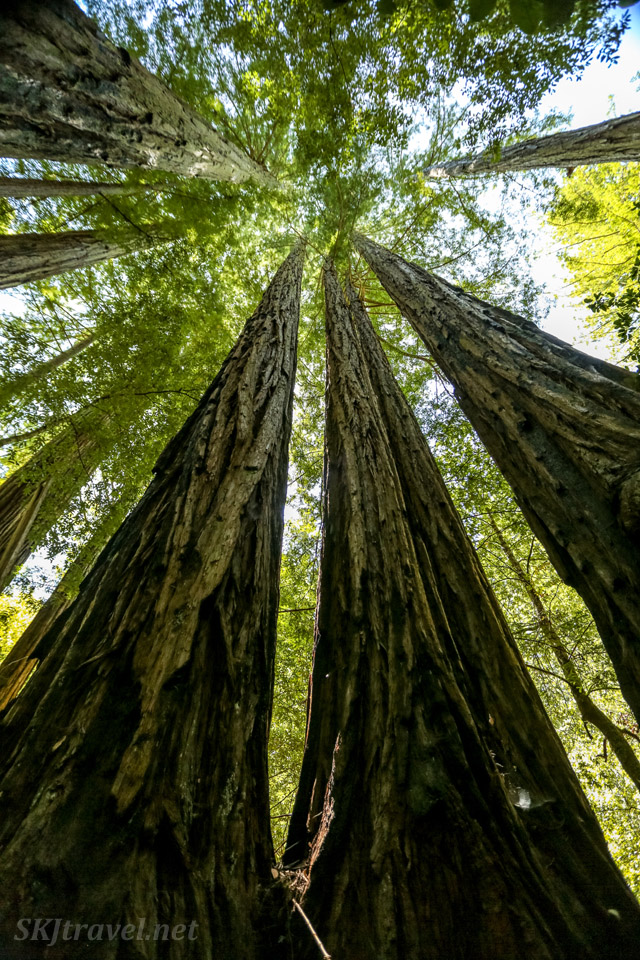 This tree, named the Mother of the Forest, was the tallest tree in the park at one time (329 feet), according to an informational brochure about the trail she's located along. Some 30 feet of her top broke off in a storm, but I couldn't find anywhere in the park's literature what the height of the tallest tree now is. 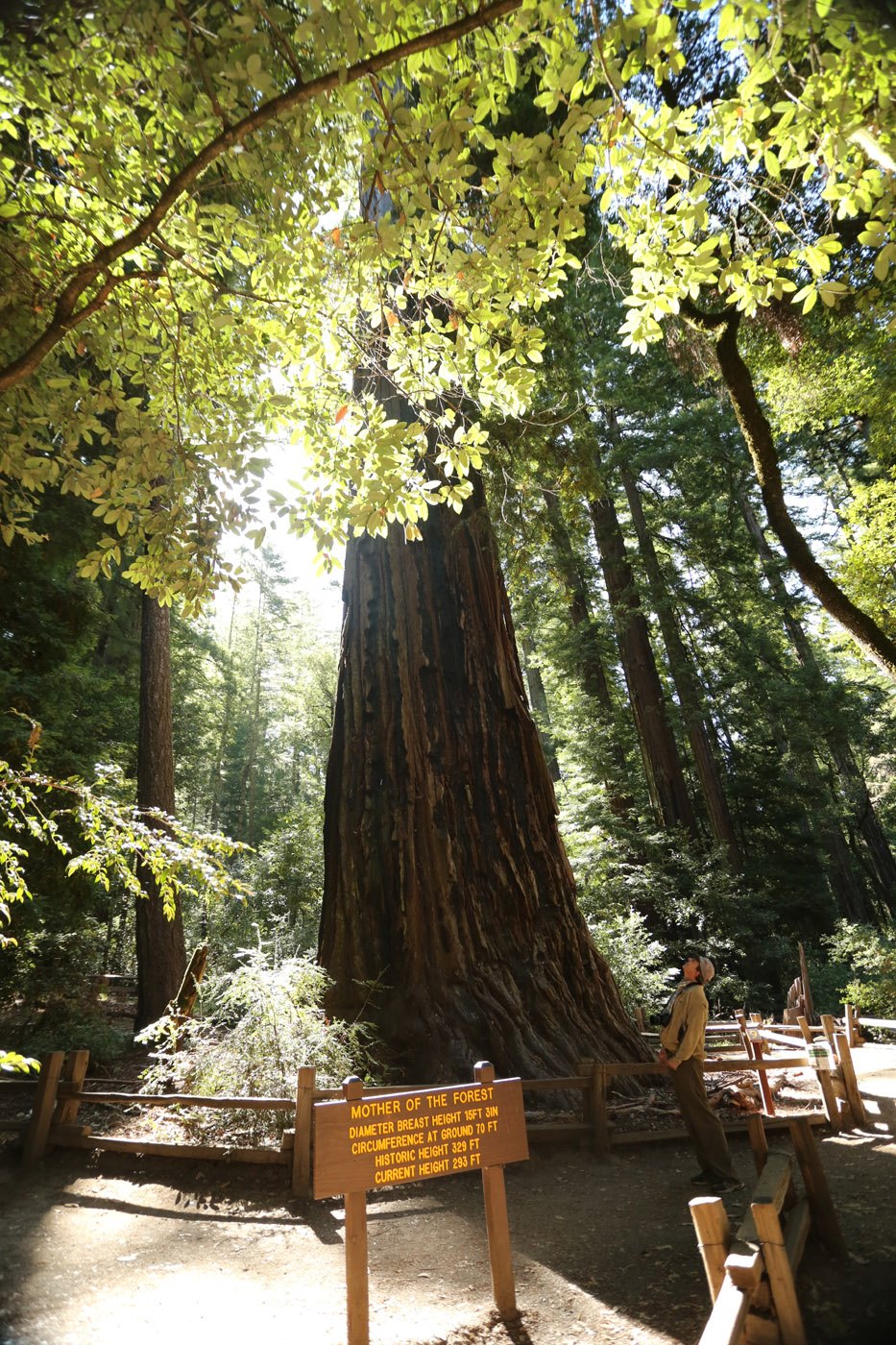 Erik will now demonstrate the scale of these trees compared to puny humans. There was a big enough patch of open ground that I could get far enough away from this first tree to fit it in the frame. Can you pick out where tiny little Erik is? 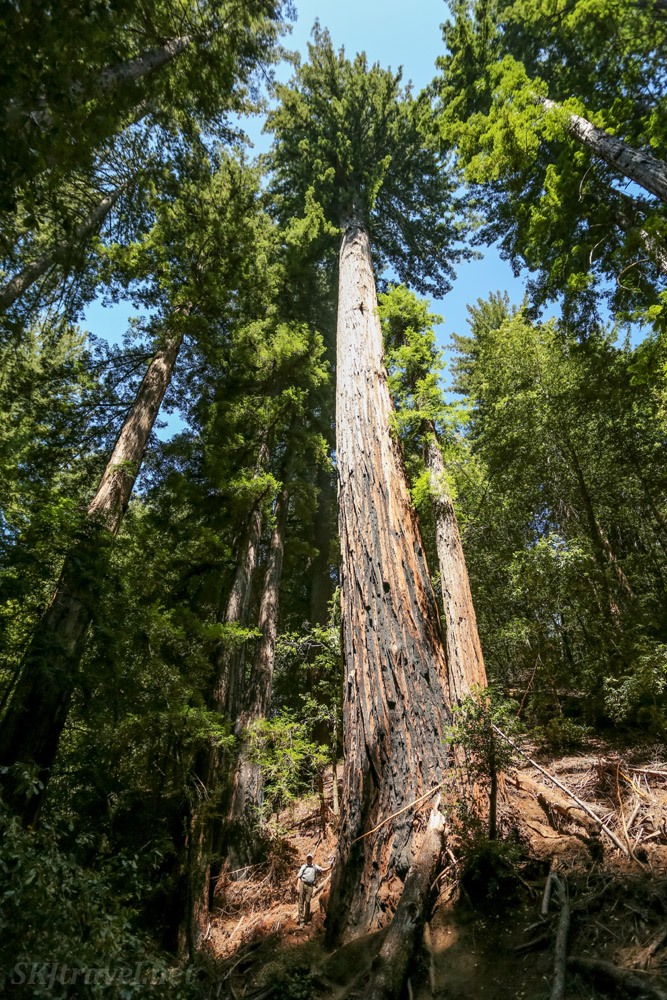 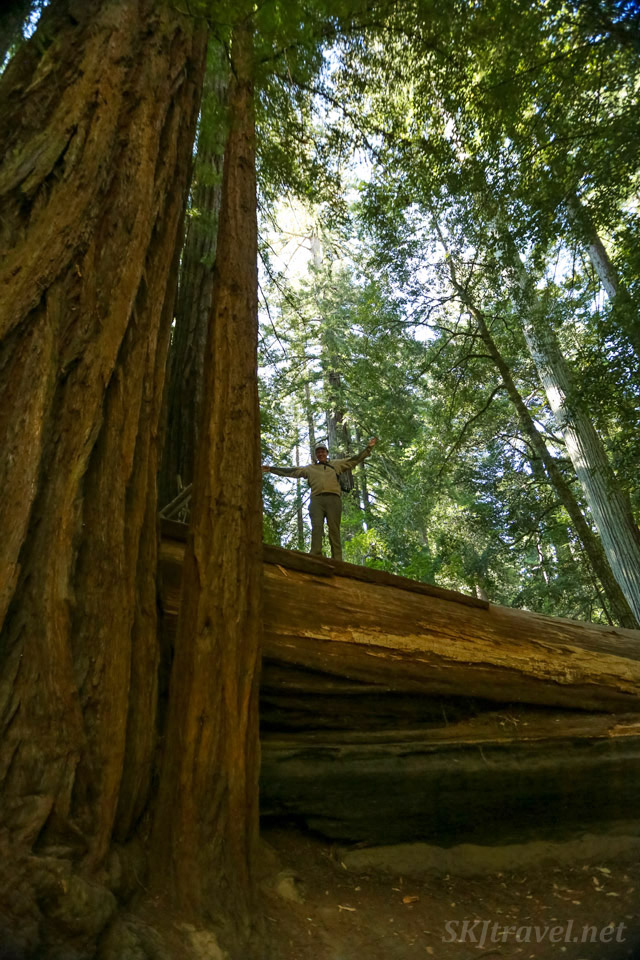 You really start to get a crick in your neck from looking up all the time. It reminded me of when we were at the Sagrada Familia cathedral in Barcelona, how we strained our necks looking up all the time. In fact I wrote an essay about it saying the best way to view the Sagrada is lying on a gurney. (Feel free to read it HERE.) I guess I wouldn't say that about the redwoods; it's better to hike through them, feel the dirt beneath your feet, the same dirt nurturing the giants. But it's the same sense of gazing skyward in mute wonder, in a place that is holy ... Gaudi drew his inspiration from nature, and nature, in my opinion, is the most holy temple of all. 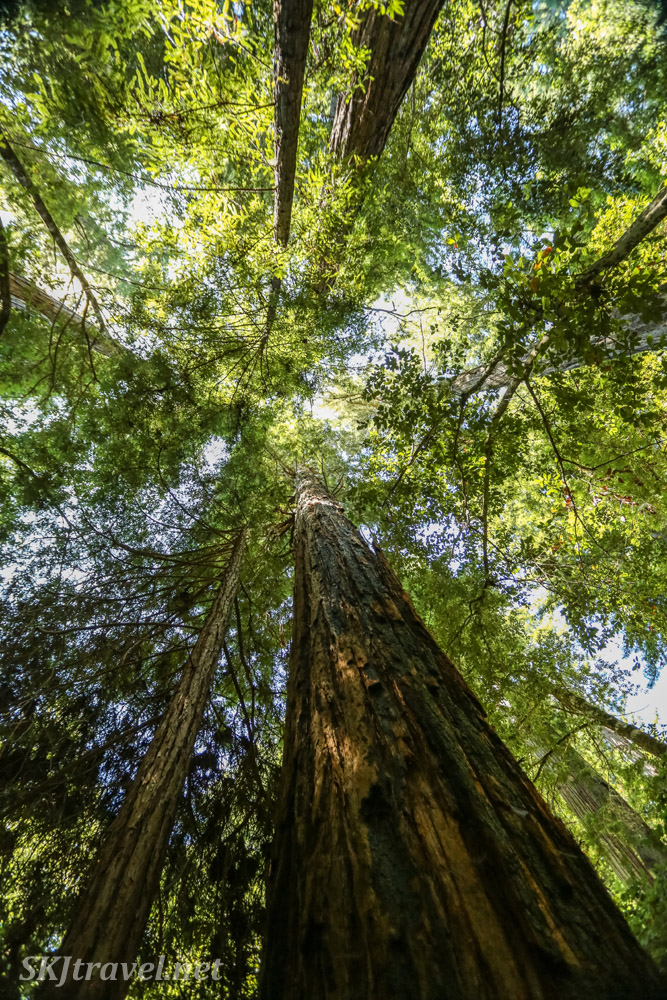 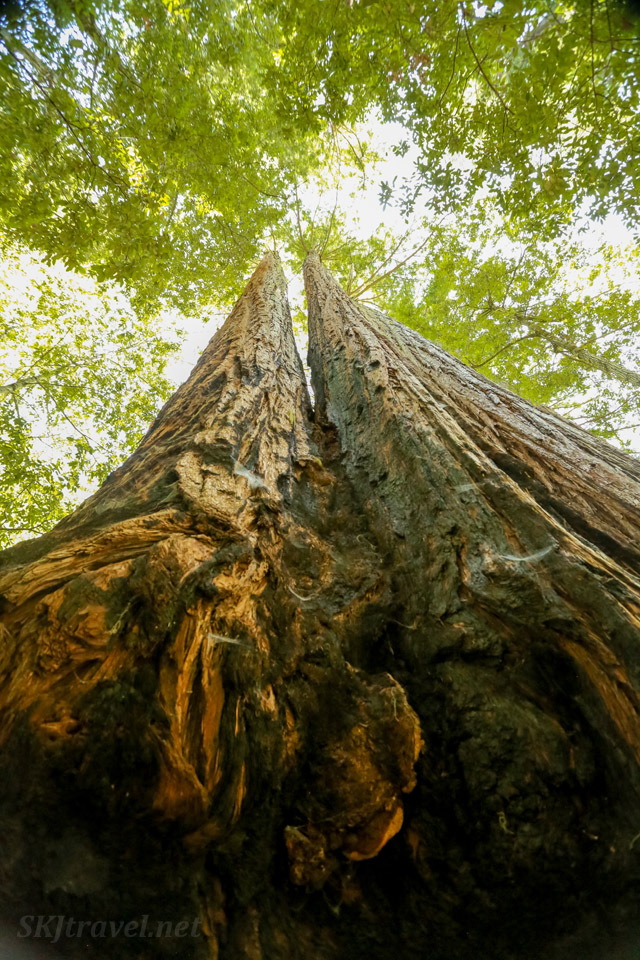 Looking up at the redwoods is like looking into outer space, in that distance is a measure of time. When you try to see the tops of these giants, who began as seeds and tiny saplings, you're looking up at a measure of time. One of the most profound illustrations was next to the park's fee station, where they had mounted a slice from the trunk of a tree that was 1,600 or 1,800 years old, I can't remember which. They put pins in various rings with tags that noted some well-known historical event, or a note about the height or fall of some empire. It's incredible to see tangibly how much human history has transpired during the life of an ordinary run-of-the-mill redwood tree -- the rise and fall of entire empires all around the globe are fractions of an inch within the trunk; almost everything seems like a footnote in context of the tree's rings, in its 1,600+ years as witness to planet earth. No, it didn't see with eyes or hear with ears all the human events, but it stood and grew and was present during all our turmoil and chaos, our social and technological evolution. We're swarming around in a frenzy, living and dying, while it grows steadily, standing still and majestic, moving only with the wind. What a beautiful counterbalance to humanity.

After taking the short and informative walk around the "Redwood Trail" (where we saw the Mother of the Forest), we set out for a little longer hike on the Sequoia and Skyline to the Sea loop, about four miles of easy terrain. Wonderfully, we encountered very few other people, we had the trail pretty much all to ourselves to walk in quiet awe through the ancient forest. 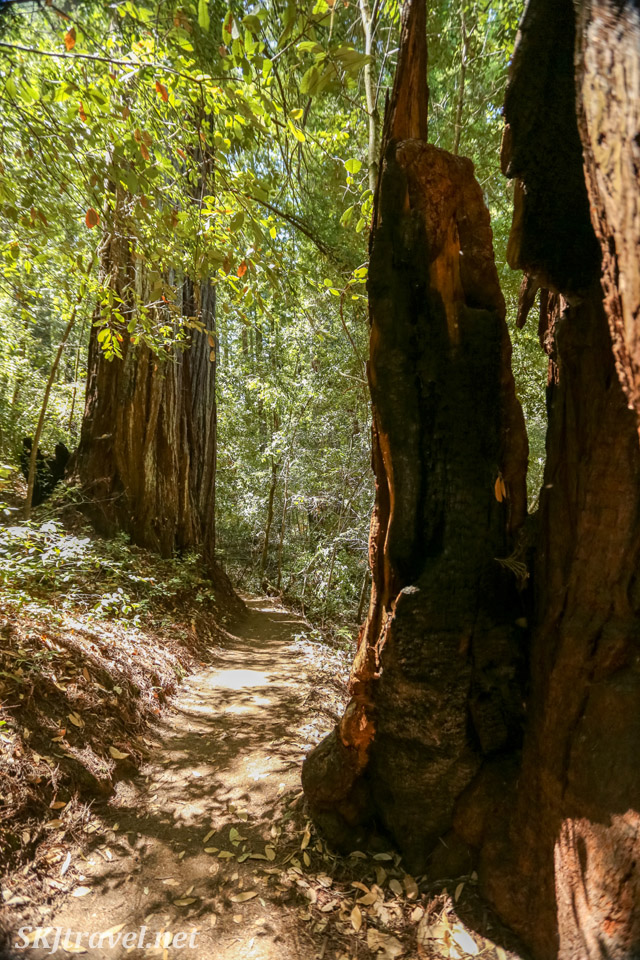 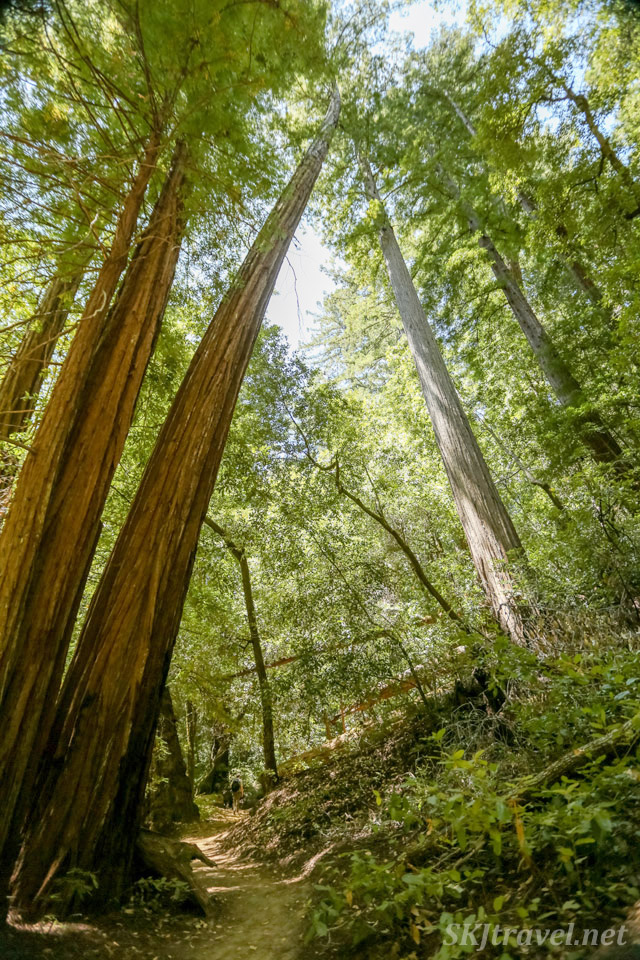 Notice in the photo above how the tree next to the trail on the left is leaning over at a pretty extreme angle and yet seems still firmly rooted. The root system within a redwood forest is a massive network, where the roots of each tree are connected with roots of all the others nearby. You might think their roots extend deep into the earth to support such height, but they are surprisingly shallow. Their strength comes from the network, they all support each other. So when these trees lean -- I'm not sure what has caused this one to -- they are prevented from toppling over by the roots of the trees surrounding them. It's pretty cool. Of course trees do eventually fall and die ... imagine witnessing one of these trees falling!

Kind of can't help but make a comparison to the human forest as many of our societies are becoming splintered, fractured, polarized and individualized, and weakened in the process. Look at how majestic and soaring this forest can become because they intertwine their roots and support each other.

One of the most remarkable things about the forest is that the majority of trees have fire scars from lightning strikes or forest fires. The redwoods are incredibly fire resistant. Rather than bursting into flames like all the pine trees around my house would, they get charred and can smolder inside, in the heart of the tree, for over a year! 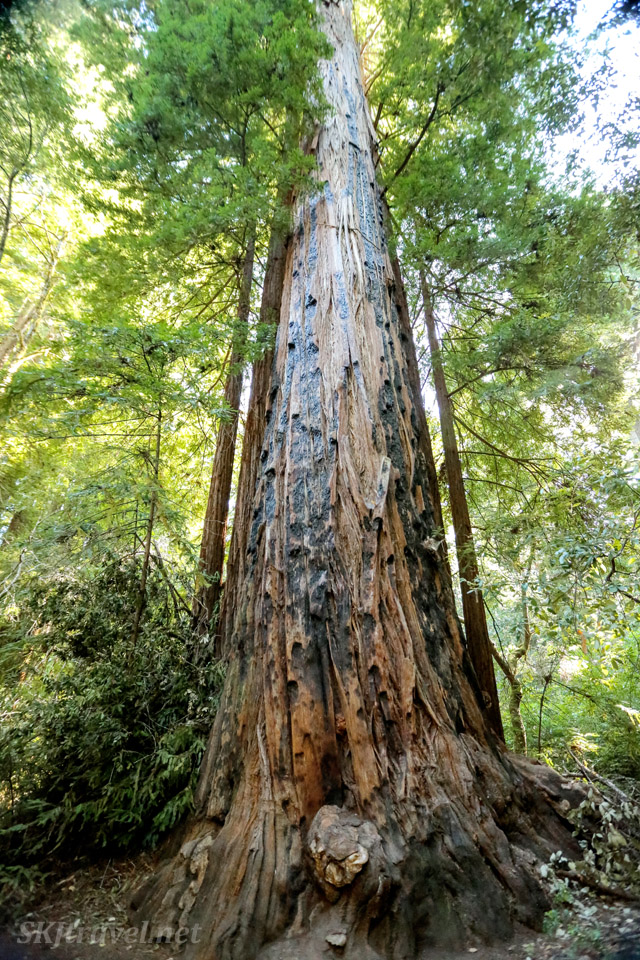 The result is a magical landscape that looks like elves and gnomes and fairies live here and spend their time producing modern-art installations. The hollowed-out spaces look like shelter for the fairy-tale folk. The creature  inside the tree below is a rather large human, and the tree would be a comfortable home even for him! Would be a palace for a gnome or troll. Or wait a minute ... is that a troll?? 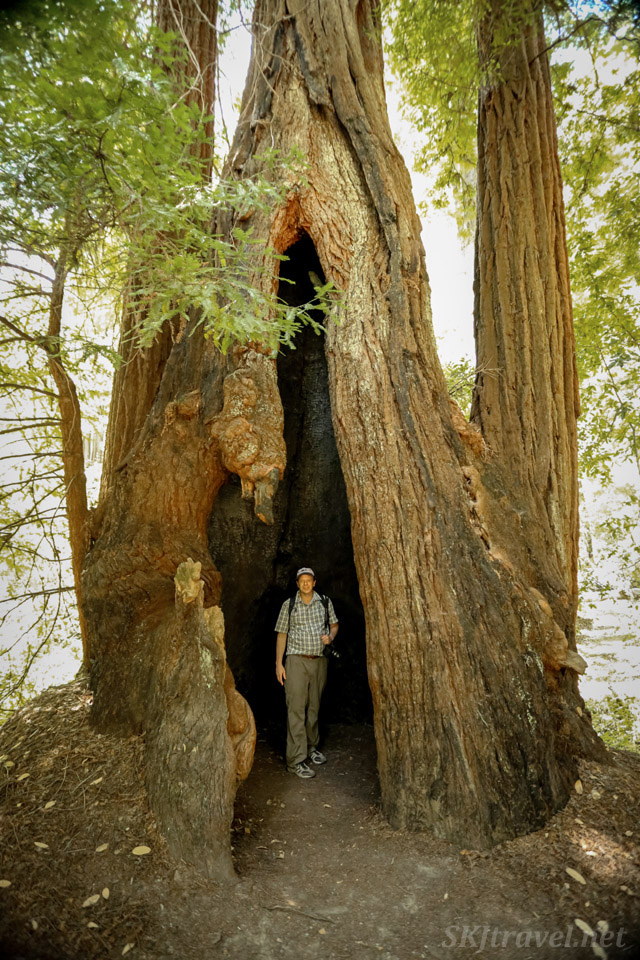 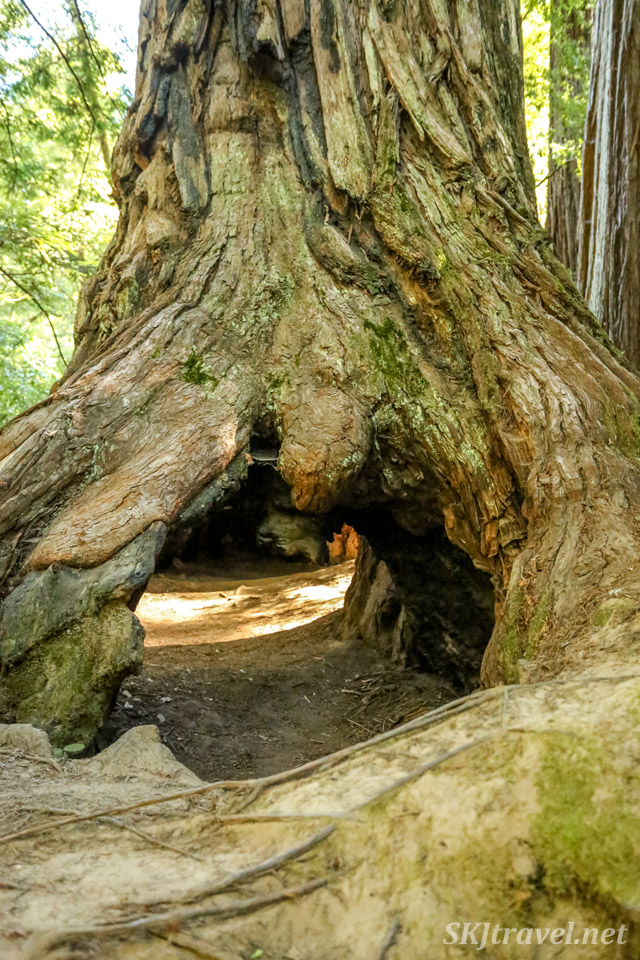 The skeletons of trees who finally succumbed to numerous fires look like sculptures you'd see in an art museum. An ancient redwood forest is a very special place ... I imagined that it would be cool, that's why I wanted to see one. But I had no idea it would feel so magical, transcendent and sacred. 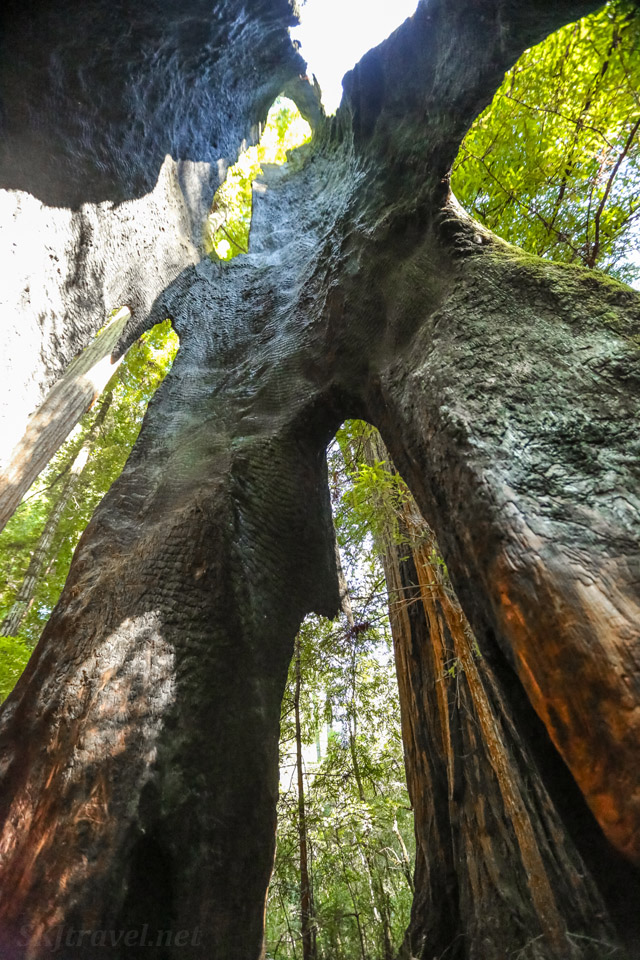 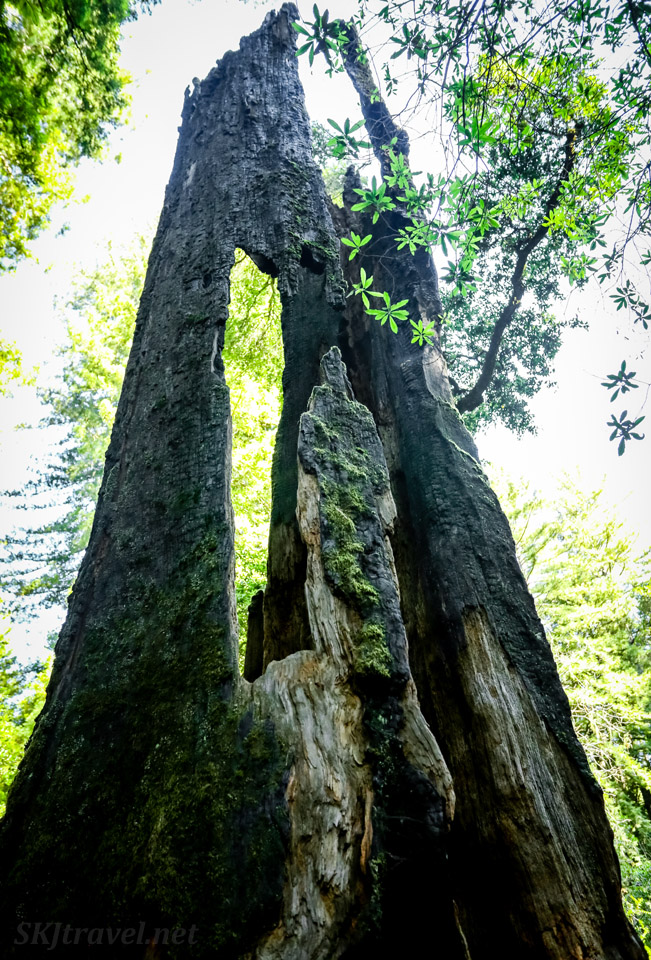 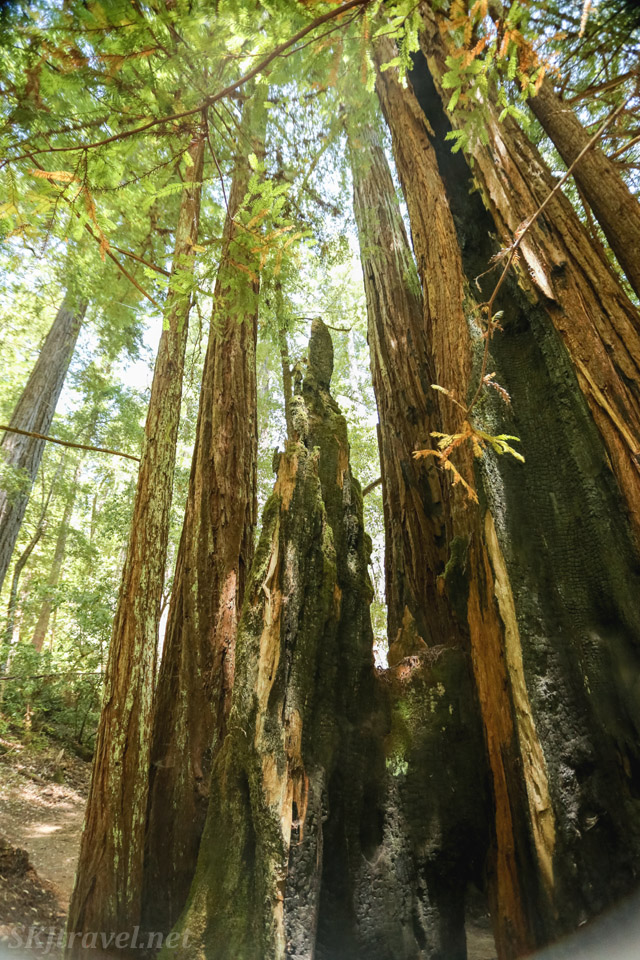 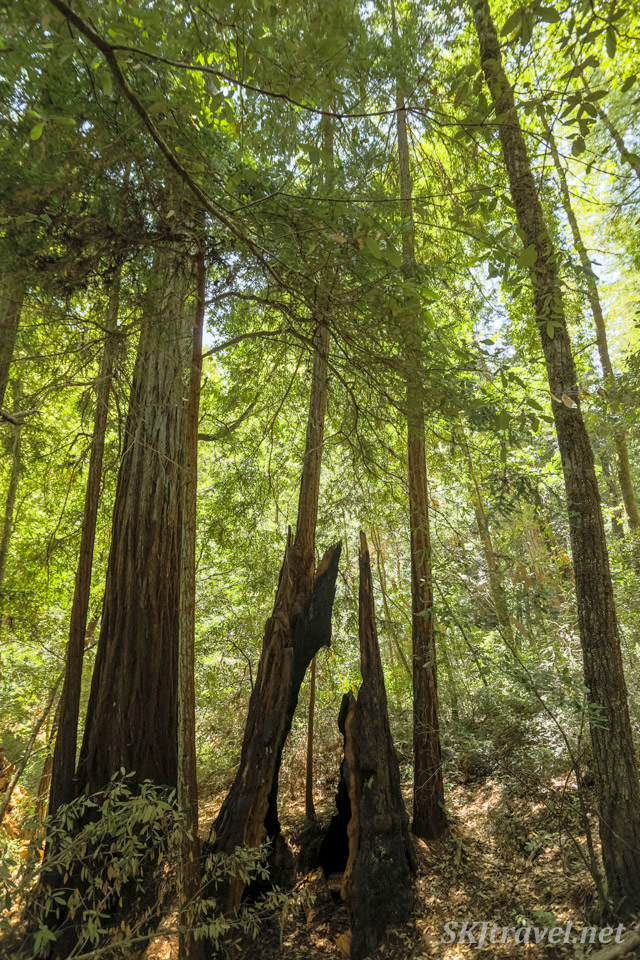 Wow, there's one of those wood fairies now! Who knew they were photographers? 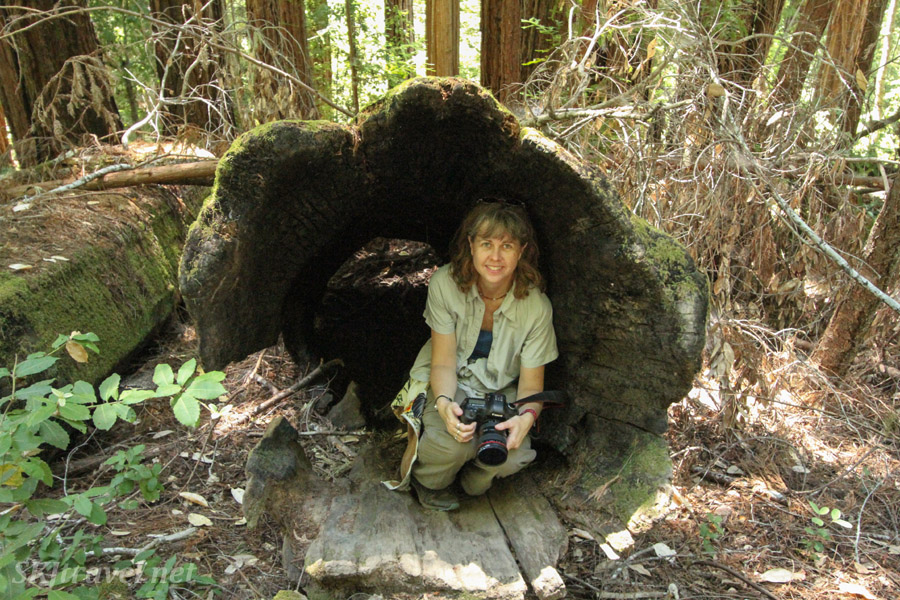 This fallen tree, neatly cut  by a chainsaw to clear the path, is so interesting the way the inside is blackened and only an outer ring is normal. It's so black, at first you think it is hollow. I presume this tree smoldered for quite some time in its past. 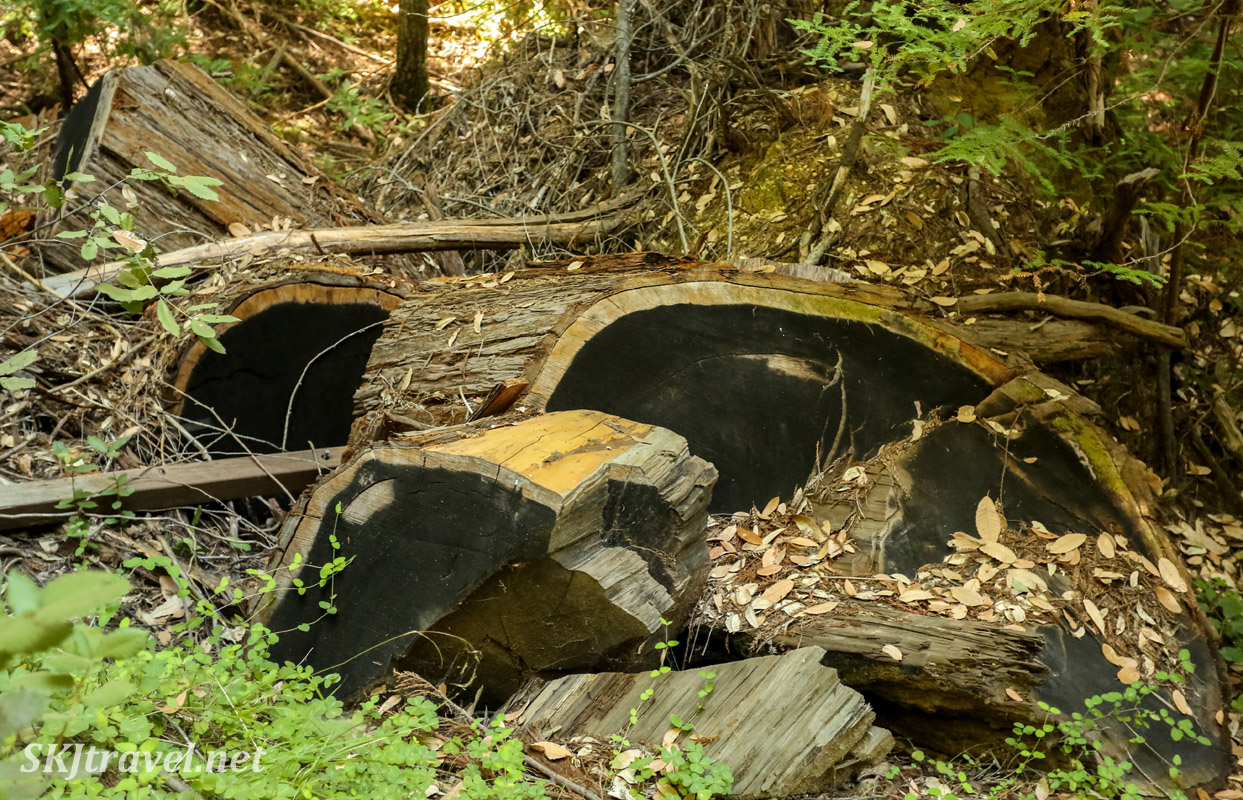 Yet another fascinating aspect of the redwoods is their bark ... each tree looks different and the bark and roots can be fabulously uber-duber trippy. 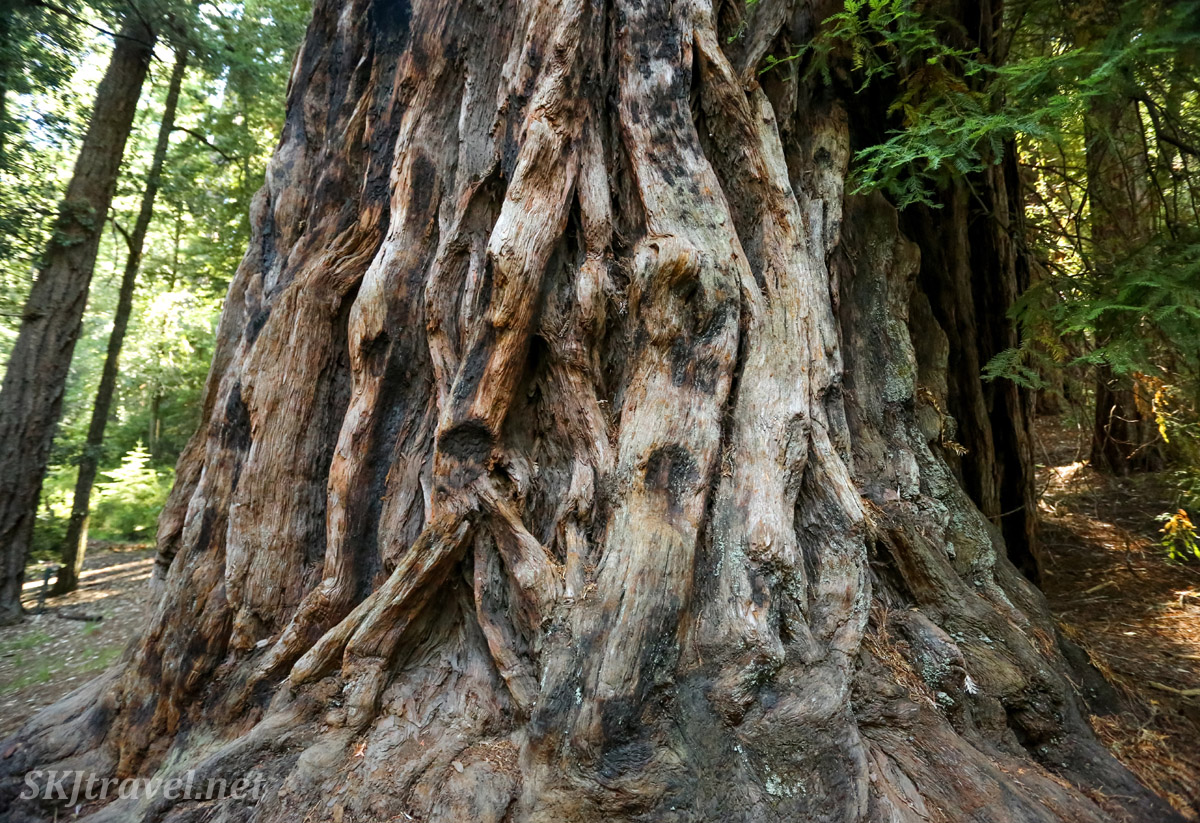 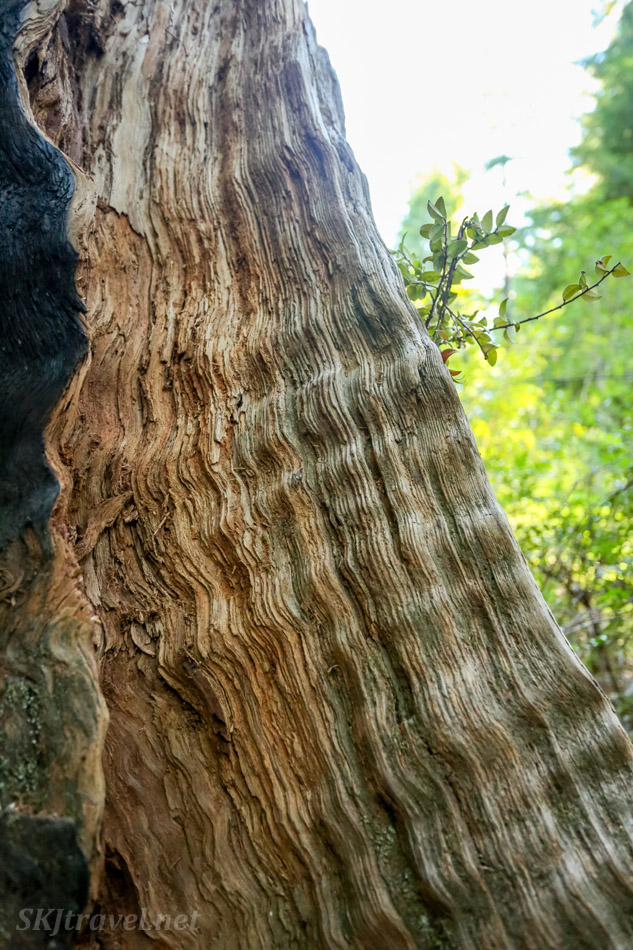 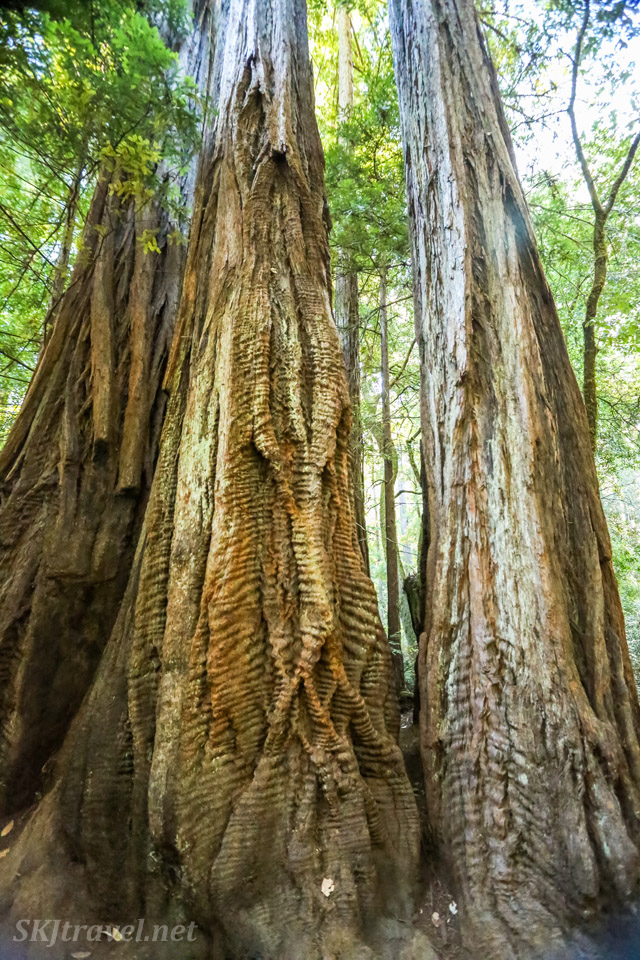 Here's something unexpectedly interesting about the trunks: the spider "webs" which are really more like spider nets. All along the trunks these nets are woven between crevices in the bark. I did not see any of the spiders who make these nets, which is completely fine by me. 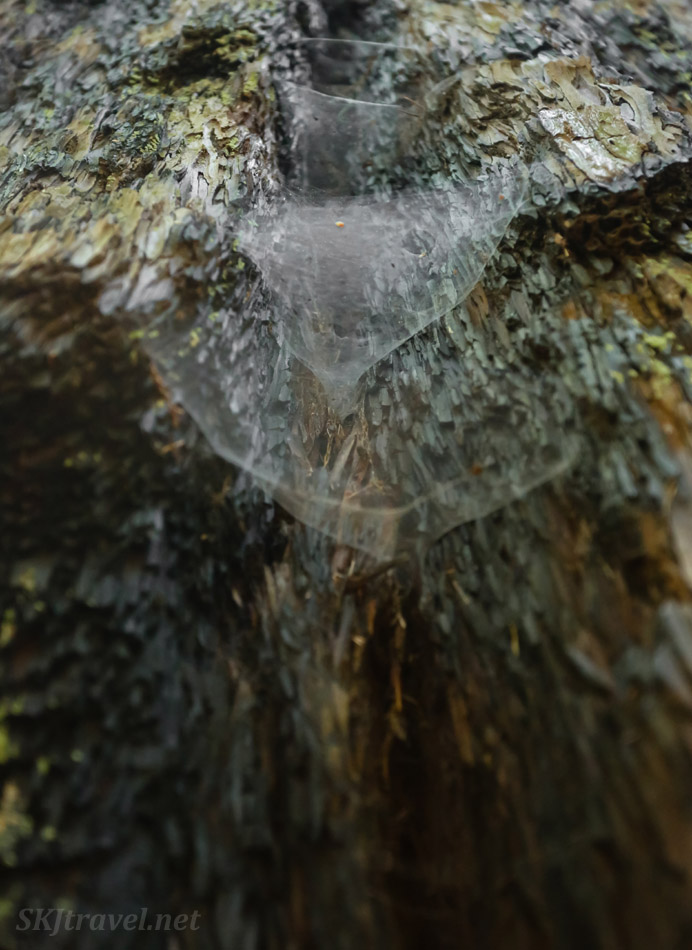 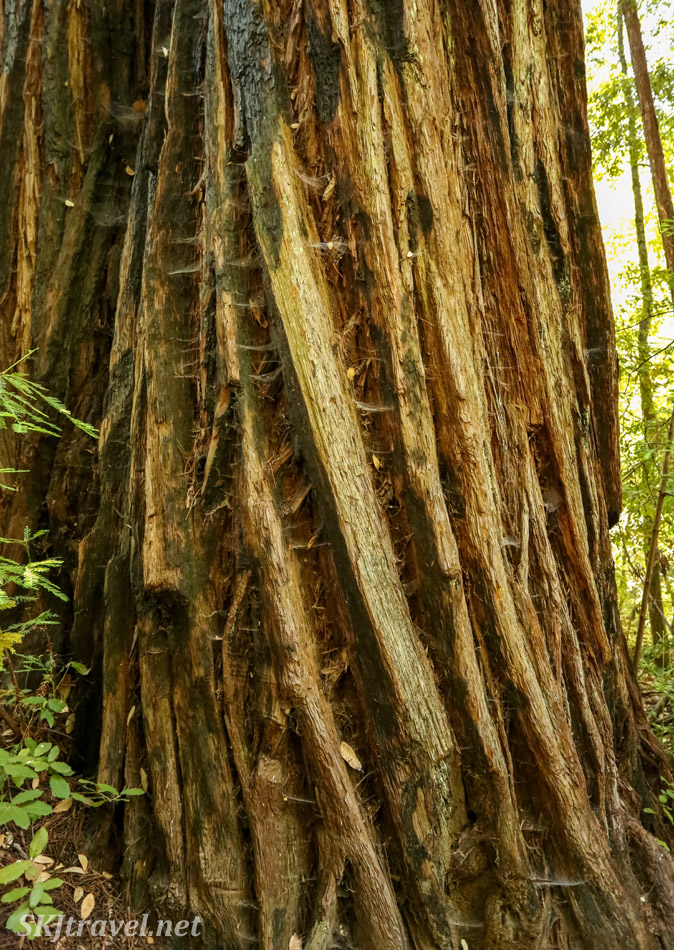 Just check out the insane topography of this patch of bark and all the different colors. 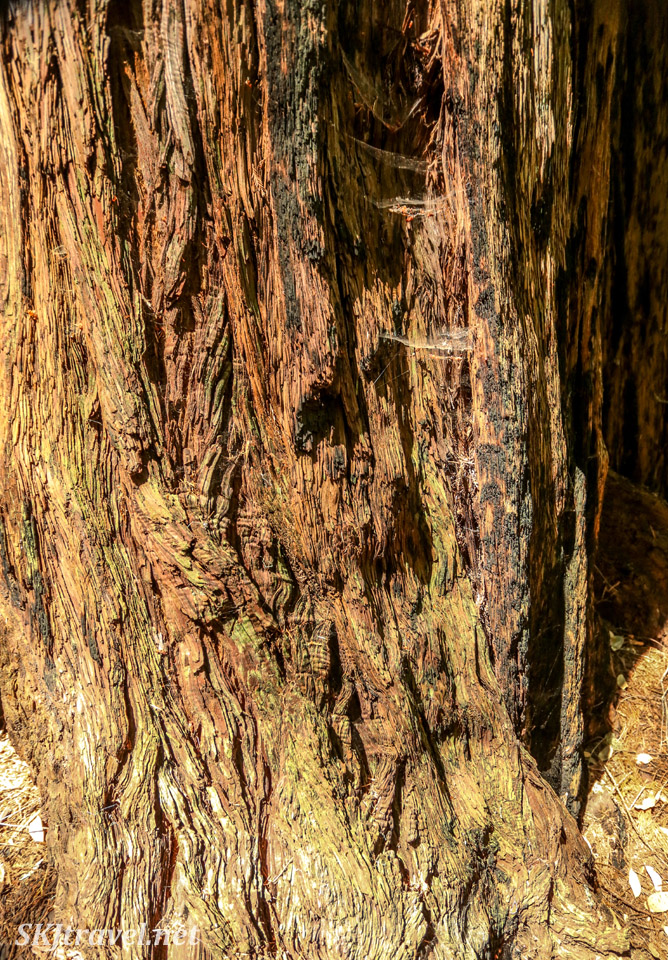 Here's a different kind of spiderweb, like a dome. 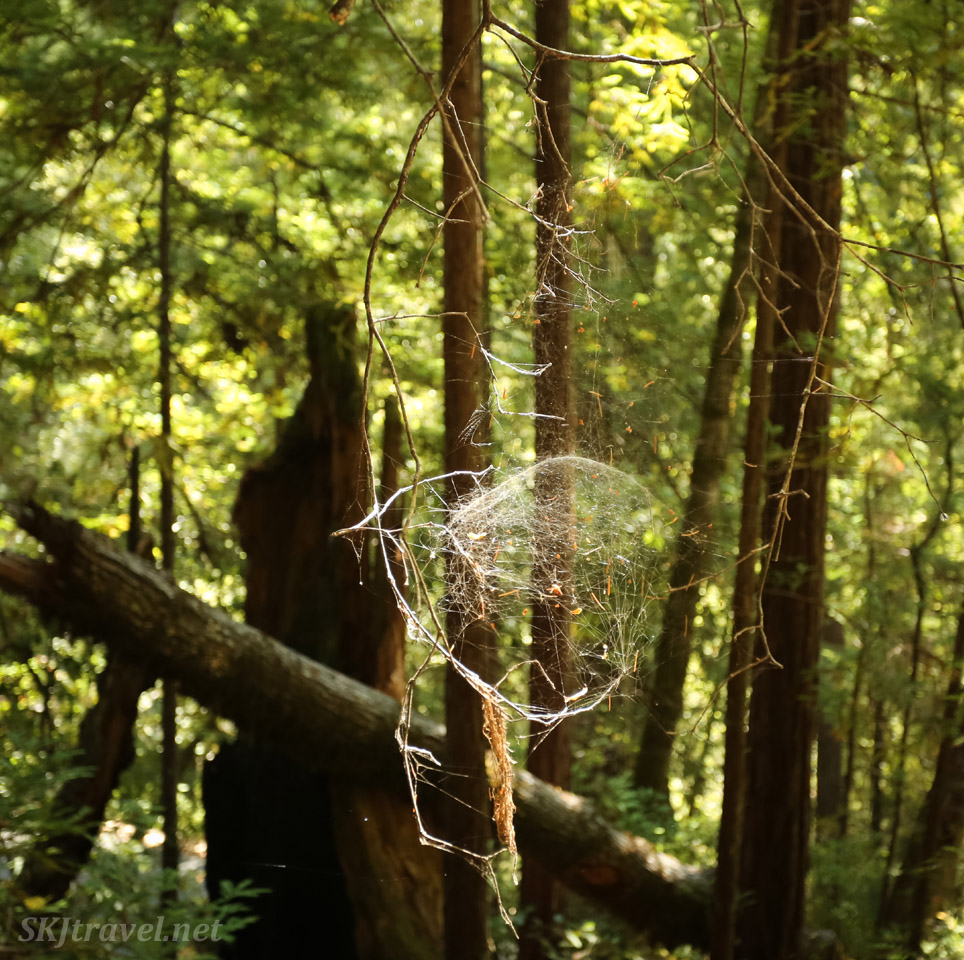 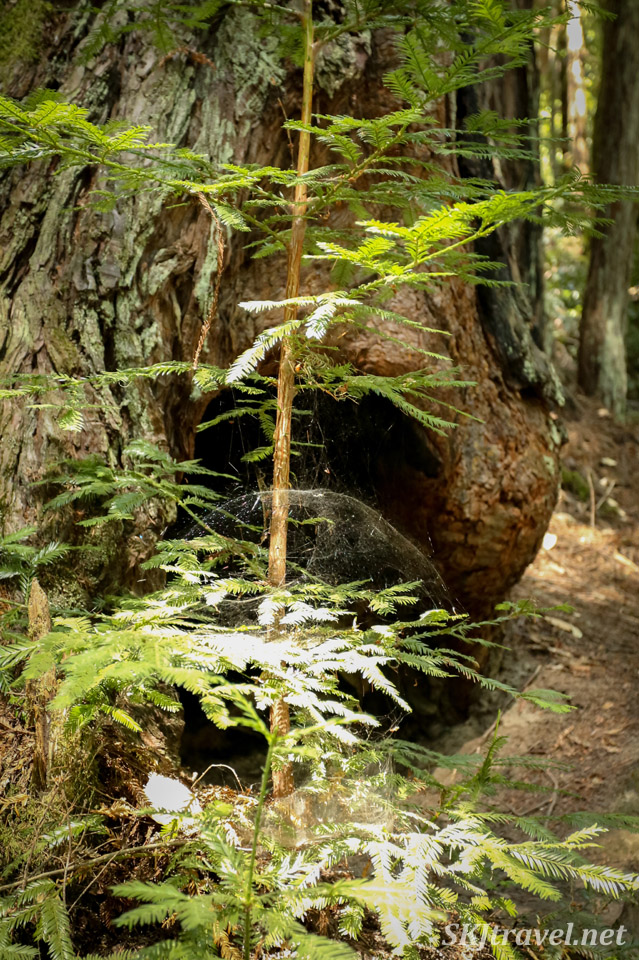 The very sweet Sempervirens Falls is along this route. Interesting rock face with the tree at the very edge, it's like someone took a knife and cut away a slice of land leaving the rock and roots exposed. And now plants are starting to grow through cracks in the rock. 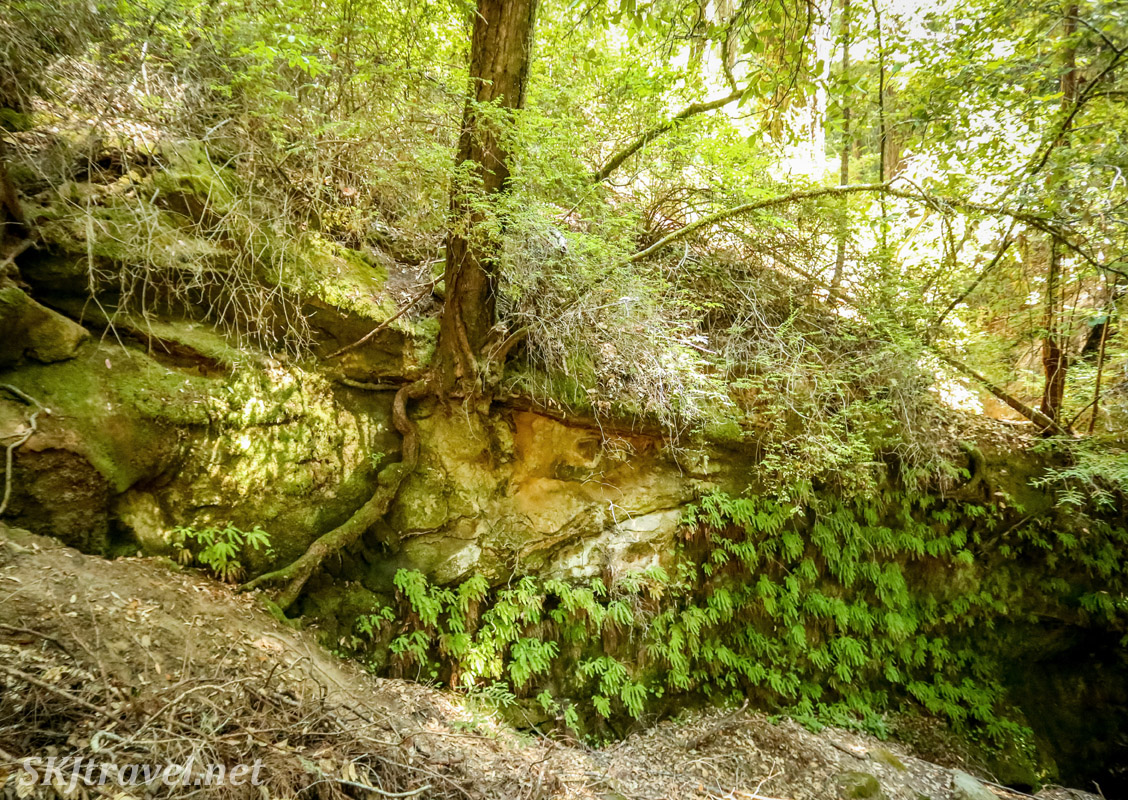 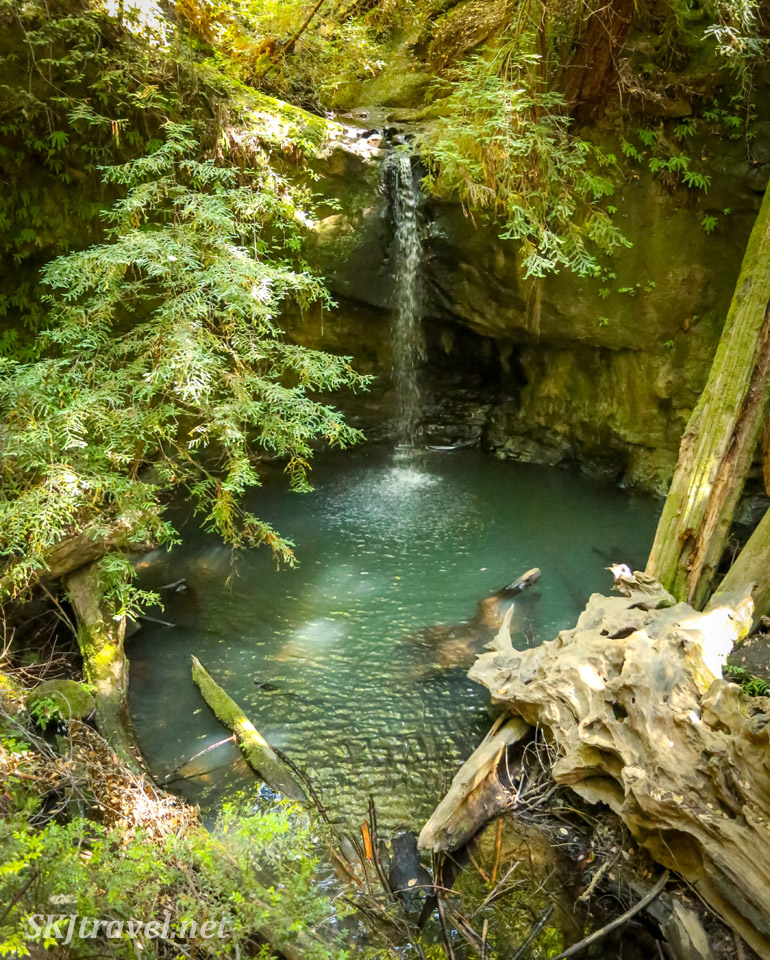 The roads on the way to the park, by the way, are also lovely. When we started out on the freeway heading out of the city, dense traffic all around, I never imagined we'd end up on these very narrow, super twisty, nearly empty roads. It was delightful.

If you're interested in how complex a forest is underground, check out this Radiolab episode that is one of my favorites. I was thinking about it while we were walking through this forest. "Tree to Shining Tree."

So, it was great to cross another thing off my List. If you find yourself in the area, I recommend checking out Big Basin Redwoods State Park. I think you have to be a real curmudgeon not to be struck with a playful spirit in this magical place. 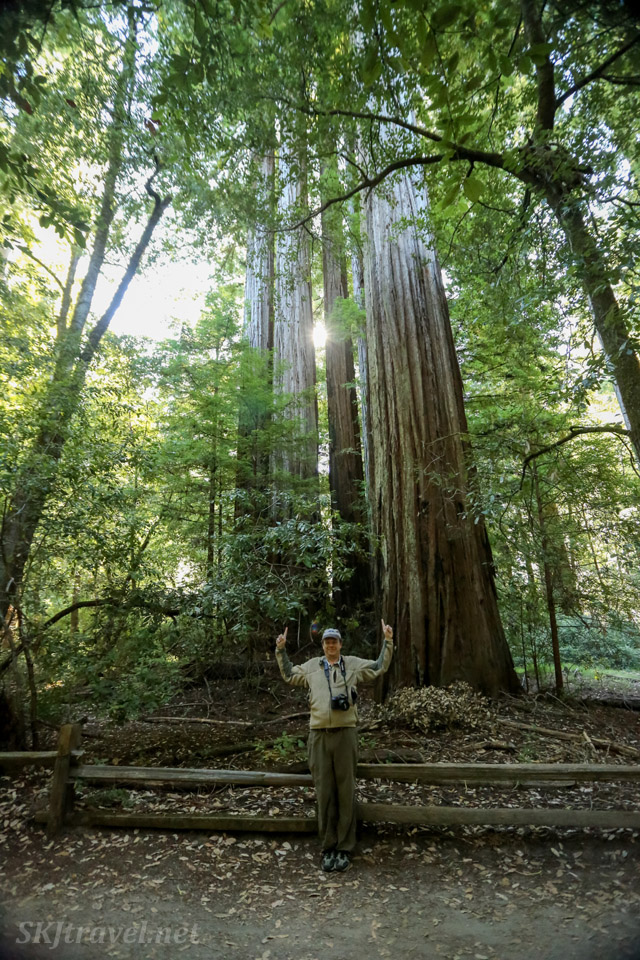 Our hike took us past a campground, and we got a kick out of some kids who were running around and pretending the forest was a castle or fort or something -- very appropriate. We heard one kid yell, "Send in more archers!" Then as we walked past another kid posted behind a tree, he yelled out, "Archer Three, false alarm!" Clearly, we were the false alarm. So fortunately, our day didn't end with being attacked by a gang of pretend archers! Or at least I presume *pretend!*